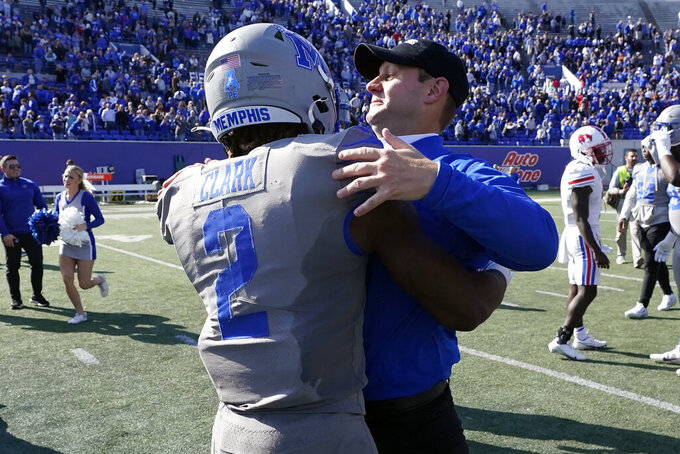 MEMPHIS, Tenn. (AP) — Seth Henigan threw for 392 yards and two touchdowns, and Memphis’ defense stymied No. 23 SMU in a 28-25 victory over the Mustangs on Saturday.

Henigan, who missed last week’s loss to UCF with a right shoulder injury, completed 34 of 53 passes, including touchdowns of 2 yards to Eddie Lewis and 27 yards to Javon Ivory.

“We’re still a work in progress,” Memphis coach Ryan Silverfield said. “One game is not going to define us. But it’s always great to come in and get a win against a Top-25 football team, another conference win.

“It was a great team win, and we did whatever it took.”

It took a stout defensive effort in the fourth quarter to preserve the victory for the Tigers (5-4, 2-3 American Athletic Conference).

The Mustangs’ rally began when Tanner Mordecai connected with Danny Gray for a 27-yard touchdown — Gray’s second of the day. Tyler Lavine scored on a 1-yard run with just under six minutes left to cut the Memphis lead to three points.

SMU had one last drive after the Tigers turned over the ball on downs at the SMU 46, but Mordecai’s pass was intercepted by Rodney Owens on the ensuing drive, sending the Mustangs to their second straight loss.

“I think that was the icing on the cake,” Silverfield said. “Let’s be real. One of the reasons we had a 4-4 record was the turnover margin.”

Memphis came in having lost four of five.

SMU coach Sonny Dykes thought his team was in a good mental state before the game, showing a lot of energy after last week's heartbreaking 44-37 loss to Houston on a 100-yard kickoff return with 17 seconds remaining.

“We’re a razor’s edge away from winning these two games,” Dykes said. “We had a chance to win both of these games at the very end, and we just didn’t do it. We won those games early on.”

The Mustangs had too many miscues against Memphis. SMU lost two fumbles, and the interception sealed the game.

“We just made so many mistakes,” Dykes said. “You can’t win a football game — it doesn’t matter who you play — when you make that many mistakes. That’s really what it boiled down to.”

He later added: “The end of the game was just kind of systematic of what the rest of the day was.”

The crucial touchdown pass from Clark to Sean Dykes came on fourth-and-2 from the SMU 40. Henigan got under center as if he was going to try to sneak for the first down. Instead, the ball was snapped through Henigan’s legs to Clark in the running back position. Clark threw to Dykes, who caught the ball in stride and outran the defender to the end zone.

The Tigers’ defense was exceptional. SMU, which entered the game averaging 504 yards of offense and 42 points per game, finished with 323 yards and failed to score at least 31 points for the first time this season. Memphis had five sacks and nine tackles for loss.

Memphis: The offense got a boost from the return of Henigan, who was much smoother directing the passing game than backup Peter Parrish. The Tigers managed only 22 rushing yards.

SMU is all but certain to fall out of the AP Top 25 after its second straight loss.