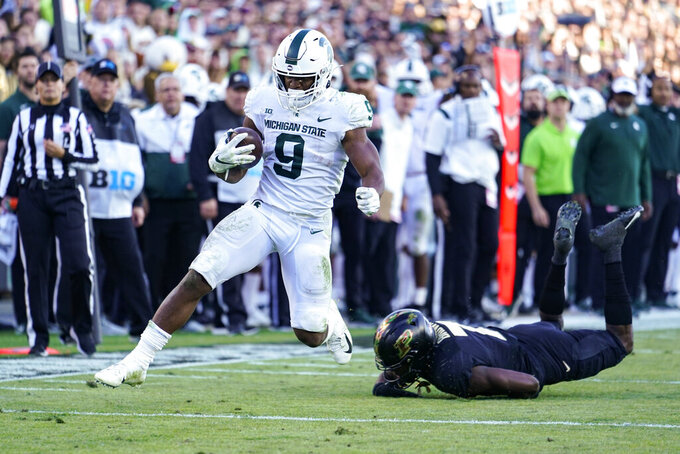 FILE - Michigan State running back Kenneth Walker III (9) breaks the tackle of Purdue cornerback Jamari Brown (7) on his way to a touchdown during the first half of an NCAA college football game in West Lafayette, Ind., Nov. 6, 2021. (AP Photo/Michael Conroy, File)

EAST LANSING, Mich. (AP) — Michigan State coach Mel Tucker said Monday he was uncertain whether All-America running back Kenneth Walker will play for 11th-ranked Spartans against No. 13 Pittsburgh in the Peach Bowl.

The Big Ten Coach of the Year said Walker is battling through some things. The transfer from Wake Forest played through an ankle injury for much of the season.

Michigan State will face the Panthers in a New Year's Six bowl on Dec. 30 in Atlanta.

Walker ran for 1,636 yards, ranking second in FBS, and ranked among the nation's leaders with 19 touchdowns. He had 579 yards rushing in each of his two seasons at Wake Forest and scored 17 touchdowns.

The junior jumped to the top of the Heisman Trophy watch lists after scoring five touchdowns in a win over then-No. 6 Michigan on Oct. 30 and finished sixth in the voting last week.

He was named Walter Camp player of the year and became the first Spartan to win the Doak Walker Award as the nation’s best running back. Walker and Ohio State quarterback C.J. Stroud shared AP's Big Ten co-offensive players of the year honors.