No. 12 Hoosiers hoping to maintain momentum against Maryland 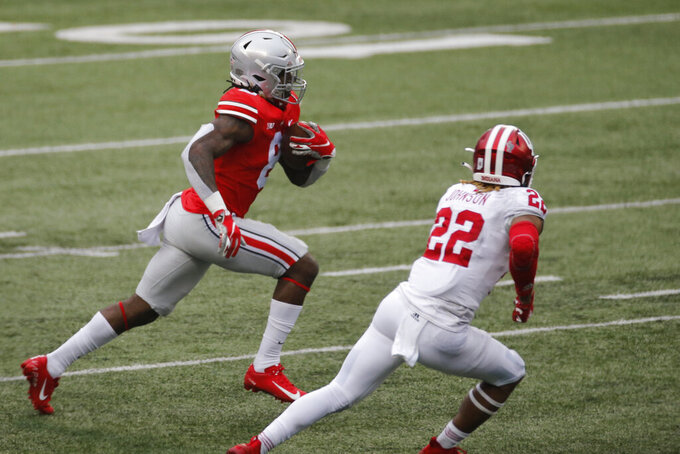 Indiana's perfect start ended last week at Ohio State, but the Hoosiers hope a potentially historic season will roll on. They have been ranked for five consecutive weeks and a win would cement a sixth consecutive Top 25 appearance — one short of the school record. The only other time it happened was 1987. Maryland returns to action after taking two unexpected weeks off because of a COVID-19 outbreak. The Terrapins restarted practice Monday and will try to win their third straight.

Maryland: LB Chance Campbell. The junior with NFL potential has been a tackling machine. After opening this season with 15 tackles in the loss to Northwestern, he followed it with 13 in a victory over Minnesota then scored on a 34-yard fumble return in the victory over Penn State.

Indiana: WR Ty Fryfogle. With 25 receptions, 560 yards and six TD catches over the past three weeks, Fryfogle has been one of the hottest players in the the country. He can become the first Big Ten player with three successive 200-yard receiving games.

Maryland has scored at least 21 points in the first halves of two straight Big Ten games for the first time in program history. The last time the Terps accomplished the feat against conference foes they were playin in the ACC in 2010. ... Indiana has won four of five against Maryland, five of its last six home games and is 9-3 in its last 12 league games overall — the program's best mark during a 12-game span since going 9-3 from October 1987-October 1988. ... Tagovailoa's 676 yards passing in the last two games are the most by any Maryland quarterback in consecutive weeks since Scott Milanovich had 692 yards in 1994. ... A win Saturday would assure the Hoosiers of two consecutive winning seasons in league play for the first time since 1987-88 and only the fourth time in program history. ... Terps RB Jake Funk is averaging 7.81 yards per carry, the second-highest average among FBS runners with 40 or more carries. ... Hoosiers S Jamar Johnson had two interceptions and a sack against No. 3 Ohio State and is tied for second in the Big Ten with three picks.