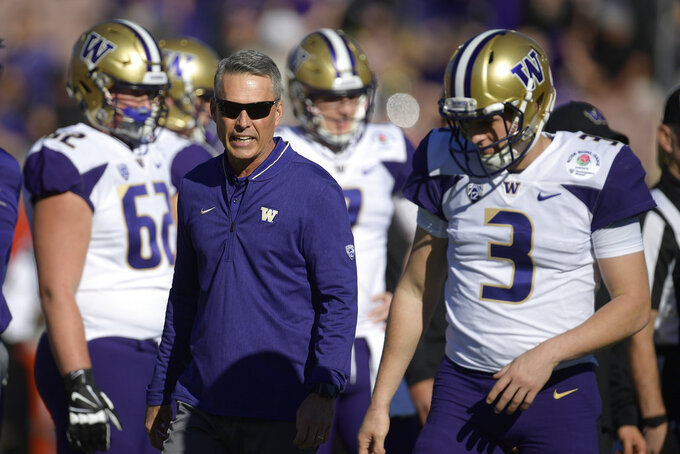 PASADENA, Calif. (AP) — Urban Meyer says he decided to end his remarkable coaching career at Ohio State partly because of the stress inherent in this high-intensity job.

After his Buckeyes blew most of a 25-point lead in the fourth quarter and had to recover a last-minute onside kick to win the Rose Bowl, anybody could understand why this 54-year-old coach can't wait to retire.

But the stress is over. Meyer is going out at the top of his profession. And for the first time, he is a Rose Bowl champion.

Dwayne Haskins passed for 251 yards and three touchdowns, and Meyer headed into retirement with a 28-23 victory after the fifth-ranked Buckeyes held off No. 9 Washington's thrilling comeback in the 105th Rose Bowl on Tuesday.

After the confetti flew in the north end zone, the Buckeyes gathered around Meyer for one last celebration of their coach. He is walking away after going 83-9 at Ohio State with one national championship, three Big Ten titles and this Rose Bowl victory, the Buckeyes' eighth overall in the Granddaddy of Them All.

"I'm a very blessed man," Meyer said. "I'm blessed because of my family, (but) this team, this year, I love this group as much as any I've ever had."

Parris Campbell, Johnnie Dixon and Rashod Berry caught TD passes in the first half for the Buckeyes (13-1), who took a 28-3 lead into the fourth and seemed to be cruising to a blowout.

But star running back Myles Gaskin threw a touchdown pass and rushed for two more scores for the Huskies (10-4), scoring from 2 yards out with 42 seconds left.

The Huskies got no closer, however. Defensive player of the game Brendon White intercepted Jake Browning's pass on the 2-point conversion attempt, and Dixon recovered Washington's onside kick.

Meyer cited his health last month in his decision to step down. A cyst in Meyer's brain causes severe headaches that are even worse for a man who says he gets not just nervous, but "deathly ill" before big games.

Meyer largely refused to reflect publicly on his career during the month since he announced his plans. After he shook Washington coach Chris Petersen's hand, raised the trophy and walked off the Rose Bowl turf, Meyer finally thought about the journey that brought him back to his home state for a stellar seven-year tenure capped by this late-breaking thriller.

"Every week, every yard, every down, when we recruited these players, I just wanted to make sure that we made the great state of Ohio proud," Meyer said. "And once again, we weren't perfect, but we did a lot of good things."

After Southern California's epic win over Penn State and Georgia's double-overtime thriller with Oklahoma over the past two years in Pasadena, the Rose Bowl got another matchup packed with late-game fireworks.

Browning passed for 313 yards and Gaskin rushed for 121 in the final game of the four-year starters' landmark careers at Washington, which has lost three straight New Year's Six bowl games.

But after three poor offensive quarters, the Pac-12 champions made it awfully interesting late. The Huskies racked up 170 yards of offense while making three strong drives in the fourth, but they had fallen too far behind in their first Rose Bowl game appearance in 18 years.

"It was too little, too late, but we're always going to keep swinging," Browning said. "That's how we are as a team. We're never out of it."

Petersen dropped to 1-4 in bowls during his otherwise remarkable tenure at Washington, including consecutive defeats in the Peach, Fiesta and Rose.

"Very frustrating when you start the first half like we started," Petersen said. "I have no idea why. It's on me. It's not these kids. ... We'll go back to the drawing board on how to prepare these guys better to come out of the gate a little bit faster. But I am proud of how hard these guys play, and I never doubt that."

While Petersen likely will get more chances for his first Rose Bowl win, Meyer insists his three-decade collegiate coaching career is over. After starting out as a graduate assistant at Ohio State, he has been a head coach since 2001, achieving huge success at Bowling Green, Utah and Florida before his stellar run in Columbus.

These Buckeyes are Meyer's eighth team to finish with one loss or fewer in his 17 seasons as a head coach.

"He's a really tough guy," said Ohio State running back Mike Weber, who rushed for 96 yards. "Sometimes you never really know what he's thinking. He really doesn't show a lot of emotion, but I felt him today. You could tell he was giving his all. It felt a little different."

Although Meyer's final season began with an embarrassing three-game suspension over his mismanagement of domestic abuse accusations against former assistant Zach Smith, he propelled the Buckeyes to another dominant regular season despite missing out on the College Football Playoff.

This game could be Haskins' farewell to Ohio State as well, if the sophomore goes pro. The offensive player of the game and Heisman Trophy finalist became the sixth FBS quarterback to throw 50 touchdown passes in a season while picking away at the vaunted Washington secondary minus injured Taylor Rapp, the second-team All-American safety.

Gaskin became the fourth running back in NCAA history with four 1,200-yard seasons during the third quarter, but Ohio State increased its lead with J.K. Dobbins' TD run.

The Huskies finally scored their first offensive touchdown since the Apple Cup when Gaskin threw a TD pass to Drew Sample with 12:17 to play.

Ohio State: The offense did enough to win despite punting on five straight late drives. Fans can only wonder whether this bunch of Buckeyes would have done better than overmatched Notre Dame or Oklahoma in the playoff semifinals.

Washington: The defeat wrapped up an unimpressive Pac-12 football season. The Huskies were the class of the conference, and they showed tremendous heart in the fourth — but they'll be frustrated with a campaign bookended by losses to national powers Auburn and Ohio State.

Ohio State: Ryan Day is now the 25th head coach in program history. Haskins could be the first quarterback drafted if he leaves, and he's just one key contributor who must be replaced. But Meyer has built a fierce machine in Columbus, and he seems certain Day is the man to drive it forward.

Washington: Replacing the most prolific quarterback and running back in program history isn't easy, but many Huskies fans are excited to see who's next. Petersen has built a powerhouse in Seattle, and Washington should be in position to contend for a trip to Pasadena almost every year.