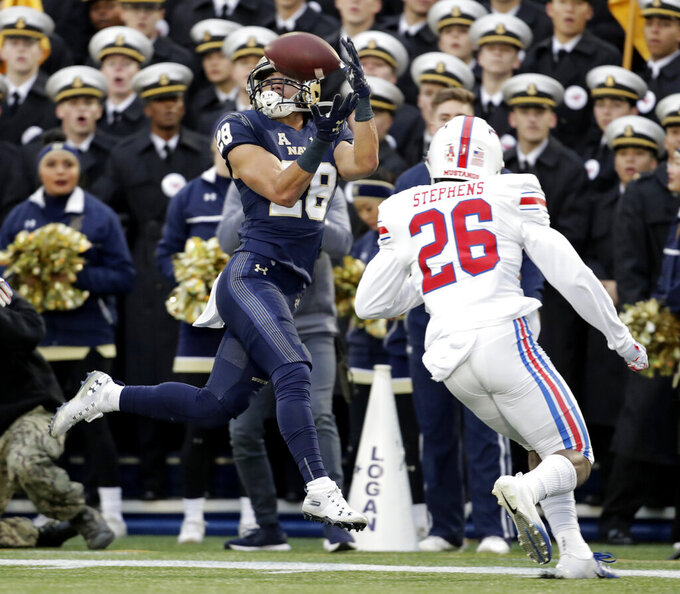 Navy wide receiver Keoni-Kordell Makekau (28) tries to make a catch before SMU defensive back Brandon Stephens (26) knocks the ball on a hit during the first half of an NCAA college football game, Saturday, Nov. 23, 2019, in Annapolis, Md. (AP Photo/Julio Cortez) 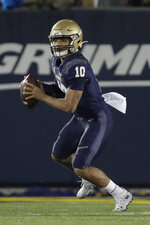 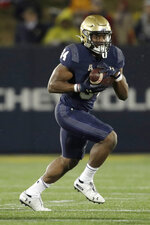 ANNAPOLS, Md. (AP) — At one point in a tight game against No. 21 SMU Navy quarterback Malcolm Perry approached coach Ken Niumatalolo about giving someone else the ball.

Perry found a seam and scampered 70 yards with just over six minutes remaining to break a tie and Navy beat the Mustangs 35-28 on Saturday. It was the culmination of a banner day for Perry, who generated 357 yards of total offense. He finished with 195 yards rushing on 38 carries with two touchdowns and completed 9 of 15 passes for 162 yards and another score.

“He actually told me at one time, ‘Coach, you have to give me a break, man. Give somebody else the ball,’ ” Niumatalolo said. “I was like, ‘Suck it up, we need you.’ I didn’t realize he carried the ball 38 times. … All I could see was (Perry) in my head. He was going to carry us.”

The Midshipmen still have a shot at winning the West Division crown of the American Athletic Conference outright should No. 18 Memphis falter in the regular-season finale against No. 17 Cincinnati. The Tigers own the tiebreaker by virtue of their 35-23 victory over Navy on Sept. 26.

CJ Sanders had a 100-yard kickoff return for SMU (9-2, 5-2), tied for the longest in the 60-year history of Navy-Marine Corps Memorial Stadium.

After trailing 21-10 at the half, the Midshipmen (8-2, 6-1) cut into the margin on a 1-yard plunge by Perry and a 25-yard field goal by Bijan Nichols on their first two possessions of the third quarter.

Navy forced a pair of three-and-outs to help shift the momentum and its deliberate running attack began to wear down SMU’s defenders.

As the Mustangs stacked the box, Perry hit Ryan Mitchell with a 13-yard scoring pass, Mitchell’s first career touchdown reception. Navy added a two-point conversion to regain the lead at 28-21 with 14:19 left.

“I was getting the ball a lot. I never complain about that,” Perry said. “Just seeing what the defense was doing, I thought it would be a good idea to spread it out a little bit. But when it came down to it, the coach called me number and I enjoy it.”

SMU tied it at 28-all on a 61-yard touchdown pass from Shane Buechele to Rashee Rice.

After Perry’s long run broke the deadlock, the Midshipmen came up with a huge stop on a fourth-and-4 from their own 12 with 2:36 remaining.

Navy entered the game leading the nation with 349.3 yards rushing per game and finished with another 378 yards on the ground.

“You have to give Navy credit,” SMU coach Sonny Dykes said. "I thought they did a really good job of making adjustments in the second half and we did a really poor job of making adjustments. (Navy) made some plays down the stretch. Malcolm Perry converted on a couple of big third downs in critical situations where he just made plays and we didn't."

The Midshipmen went undefeated at home (4-0) in the regular season for the first time since 2016, and they still could host the AAC championship game or perhaps play in the Military Bowl that is held in Annapolis.

SMU: The Mustangs are likely out of the running for a conference title, but they have already won four more games than last season.

Navy: The Midshipmen still have a shot at the AAC championship and can win the Commander-in-Chief's Trophy with a victory over Army on Dec. 14.

SMU closes out the regular season Saturday against visiting Tulane.

Navy travels to Houston on Saturday.