Purdue rolls in second half to top Northwestern at Wrigley 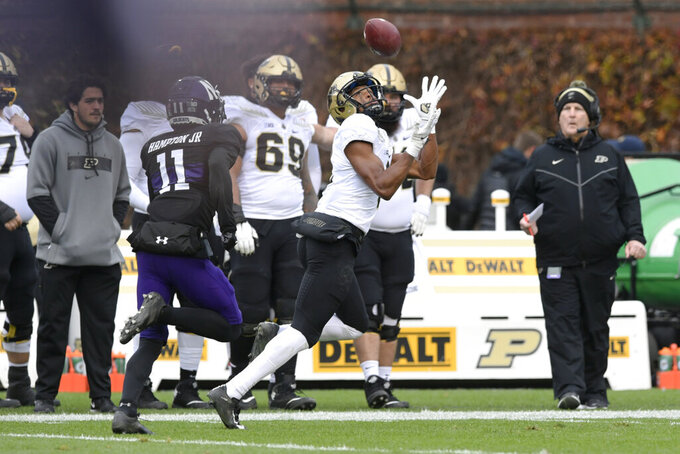 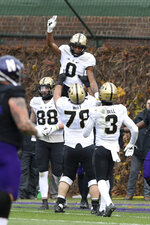 “Today was my day and I had to execute,” Wright said. “(O’Connell) is a great quarterback and I’m happy I could make the plays.”

The Boilermakers never trailed and scored touchdowns on their first two possessions of the second half to give themselves some breathing room. Wright, who’d never caught more than one touchdown before Saturday, had scoring catches of 17 and 45 yards in the third quarter to cap his best game.

David Bell had 12 receptions for 101 yards and seemed to draw more attention from the Wildcats. It left Wright in frequent mismatches on the left side of the field.

“They were covering David and it left a lot of one-on-one opportunities on that side of the field,” O’Connell said. “We had to take advantage of those.”

Up 6-0 midway through the second quarter, O’Connell found Wright streaking down the sideline for a 53-yard touchdown pass. Northwestern answered with a long touchdown drive in the final 1:45 to go to intermission down 13-7.

“We lost the one-on-one matchups,” Wildcats coach Pat Fitzgerald said. “When we tackled them, we held them to field goals.”

Mitchell Fineran kicked four field goals for the Boilermakers, who ended their road season 4-2. The two losses were at Notre Dame and Ohio State.

Andrew Marty was 10 for 14 for 93 yards and a touchdown for Northwestern, which played its home finale at the famed home of the Chicago Cubs.

Purdue’s Chris Van Eekeren lost his footing as he made contact with the second-half kickoff and sent the ball dribbling into the middle of the field. Things still went the Boilermakers’ way: Purdue recovered the unintentional onside kick and turned the possession into its second touchdown of the day.

“It wasn’t by design,” coach Jeff Brohm said. “We had some luck on our side and we took advantage of it.

“It was huge. They had some momentum after scoring at the end of the first half and they were going to get the ball back.”

The south end of the field ran along the right-field line of the ballpark but a few stretches of the warning track were the only patches of dirt. Both the mound and base paths were covered with sod for the game and the teams shared the north sideline due to a lack of space on the south end.

Each team had a couple of people holding up banners at either 45-yard line throughout the game to keep the opposition from getting nosy.

Saturday’s game was the second football game at the historic ballpark since the NFL’s Bears moved to Soldier Field after the 1970 season. The Wildcats, who lost to Illinois here in 2010, will play three future games at the park under an agreement with baseball’s Chicago Cubs.

Saturday’s game wasn’t a sellout — 31,500 tickets were sold — but O’Connell, who prepped in Chicago’s northern suburbs, still won’t forget it.

“It was an amazing atmosphere,” he said. “I’m so lucky to get a chance to play here and have a good performance here.”

Purdue: A long opening drive ended with a missed field goal try and the second went three and out, but the offense was fine after that. The Boilermakers scored on their next seven possessions and Northwestern rarely had an answer when O’Connell targeted Wright. The aerial attack should continue next weekend against an Indiana defense that started Saturday 74th in passing yards allowed.

Northwestern: Marty was briefly replaced by Ryan Hilinski in the second quarter and seemed to respond positively, but the Wildcats’ inability to sustain most of their first-half drives — one ended with a blocked field goal try — left them playing catch-up the rest of the day. Northwestern hasn’t scored more than 14 points during the five-game skid.