Syracuse seeks to keep running, get win at Florida State 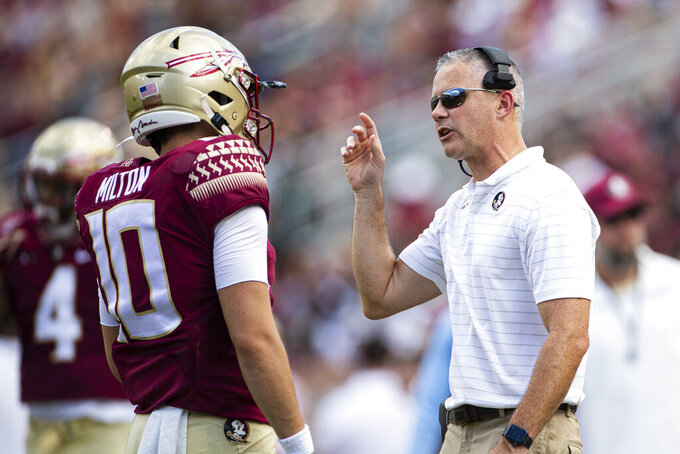 TALLAHASSEE, Fla. (AP) — Syracuse has matched its best opening month of the football season since Dino Babers took over the program in 2016.

The Orange (3-1) would love nothing more than to build on their momentum in Syracuse's Atlantic Coast Conference opener against the Seminoles on Saturday. Florida State (0-4, 0-2 ACC) is winless in league play but Syracuse isn't preparing for the Seminoles based on their record.

“Florida State is 0-4, everybody knows that,” Syracuse defensive end Josh Black said. “But that’s rat poison right there. Florida State is Florida State. You’re not going to go down there and beat them just because. You have to practice like pros, approach everything like a professional or else we’ll get beat.”

If the Orange keeps running the way they have been, Syracuse will claim its first road victory in the series with Florida State. Syracuse averages 216 rushing yards per game (20th in the FBS) and will face a Seminoles rush defense that is allowing just 3 yards per carry (28th in the FBS).

Syracuse tailback Sean Tucker ran for 169 yards in the win over Liberty last week, giving him three 100-yard rushing days in four games in 2021. Tucker already has surpassed the 100-yard mark in rushing in six of 13 career games at Syracuse.

The Orange have also turned to Mississippi State transfer quarterback Garrett Shrader, who had a pair of touchdown runs and 53 yards on 16 carries in his first start for Syracuse against Liberty. What Shrader has not shown yet is an accurate arm, completing just 6 of 15 passes for 77 yards.

“Obviously, you want to be two-sided where you can have an opportunity to do this or that,” Babers said. “We feel like we had some throwing opportunities in the (Liberty) game that did not connect."

Florida State has been good at limiting the run but not consistently enough in its first four games. A big problem has been opponents’ third-down conversions.

The Seminoles allowed Louisville to convert on 8 of 10 third-down opportunities in the first half but just 1 of 8 in the second half in last week’s loss to the Cardinals. Florida State is 103rd in the nation in third-down defense, allowing opponents to convert 44.9% of the time.

“You’ve got to get off the field,” Florida State defensive coordinator Adam Fuller said. “First series, third-and-9 and we give up a conversion. Second series, we have a third-and-6 and we get a late hit. Those things add up and you end up staying on the football field. ... We’re constantly trying to educate them in between each series — ‘This is what you’re getting and this is the way it needs to be played.'"

Some other things to watch when Florida State plays host to Syracuse:

Syracuse has registered 14 sacks in the past two games, the most in a two-game stretch in program history. The Orange are second nationally in sacks per game (4.5), even though they failed to get one in the season opener at Ohio. Syracuse has 39 tackles behind the line for 143 lost yards, including 18 sacks for 99 yards. Defensive lineman Cody Roscoe leads with 8 TFLs and 5.5 sacks.

Florida State defensive end Jermaine Johnson leads the nation with six sacks and is third with eight tackles for loss. The Seminoles have 13 sacks in 2021.

Florida State tailback Jashaun Corbin has 439 rushing yards, which has already surpassed his 401-yard output on the ground from a year ago. Corbin needed just 48 carries to do so, far less than the 81 rushes in 2020.

In his second year at Florida State following a transfer from Texas A&M, Corbin has an 89-yard touchdown run against Notre Dame and a 75-yard touchdown run vs. Louisville. He is tied for 13th in the FBS in rushing yards per game (109.75).

The running of Tucker and his increasing workload has the Syracuse defense all smiles. They were able to stay longer on the sideline for breathers against Liberty.

Tucker is averaging 177.75 all-purpose yards per game to rank second nationally. Against the Flames he had 32 carries as the Orange held the ball for 31 minutes, 21 seconds. It marked the first time this season they’ve had the edge on the clock.

Florida State’s defense didn’t allow Louisville to score and held the Cardinals to 79 yards of total offense in the second half last week. It was the Seminoles’ first shutout in a second half against an ACC opponent since Nov. 14, 2015 vs. North Carolina State.