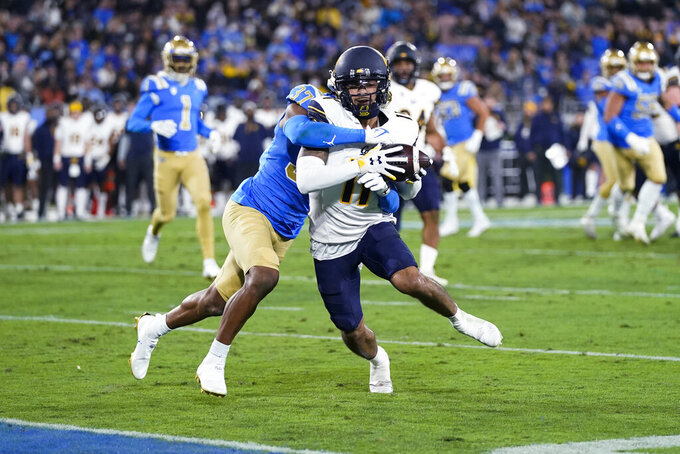 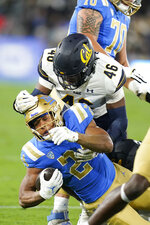 PASADENA, Calif. (AP) — The Rose Bowl was chilly, and the crowd was fairly sparse. The UCLA Bruins still celebrated their regular season-ending victory over California to honor the seniors who persevered through their difficult four-year transformation into a winner.

Chip Kelly warned the Bruins not to celebrate this 42-14 rout of California too much, however.

“The cool part about it is we get one more opportunity this season,” the fourth-year head coach said of his first bowl team at UCLA. “We don't know where we're going or who we're playing, but this group doesn't have to break up, so this wasn't really a finale to anything.”

Dorian Thompson-Robinson threw three touchdown passes, Zach Charbonnet rushed for 106 yards and another score, and UCLA wrapped up its first eight-win regular season since 2015 on Saturday night with 32 unanswered points against the Golden Bears.

Kyle Philips caught two touchdown passes, Greg Dulcich caught another and Kazmeir Allen rushed for a score in the home finale for the Bruins (8-4, 6-3 Pac-12), who completed their first unbeaten November since 1998. UCLA also wrapped up a share of second place in the Pac-12 South for the first time since 2014.

“We just had a lot of momentum in the month of November,” UCLA safety Quentin Lake said. “Tonight we held an offense who had over 600 yards last time out. We were just locked in on the ball on every play. We’re happy, and let’s keep this ball rolling.”

Chase Garbers and Christopher Brooks rushed for touchdowns for the Golden Bears (4-7, 3-5), who have seven losses for the fifth time in the mostly dismal decade since Cal fired Jeff Tedford, the winningest coach in school history. Cal officially will miss a bowl game for the eighth time in 12 years.

“We really struggled in the third quarter to get much going on offense, and we weren’t stopping them on defense,” Cal coach Justin Wilcox said. “So pick a matchup. They beat us everywhere. We expected to play better. We knew this would be a very tough game.”

After racking up 636 yards last week in their Big Game blowout of Stanford, the Bears managed just 14 net yards on their first four drives of the second half while UCLA pulled away. Charbonnet also gashed the Pac-12's top rushing defense for his seventh 100-yard game of the season.

“They’re one heck of a team,” said Garbers, whose 20 yards rushing were his fewest since Oct. 2. “In the end, we flat-out got beat. They did a good job creating havoc in the backfield. There’s nothing special they did. They just played their game plan, and in the end, we lost. Their defense beat our offense, simple as that.”

UCLA led 10-0 early in the second quarter on Philips' 4-yard TD catch, but Brooks and Garbers sandwiched their touchdowns around a fumbled kickoff return by Allen, the breakout star of the Bruins' 62-33 thrashing of rival Southern California last week in the annual crosstown showdown.

The Bruins went ahead for good on Allen's 8-yard TD run 26 seconds before halftime, and then went up 24-14 on Dulcich's exceptional 29-yard TD catch shortly after the break. Thompson-Robinson shook off a terrible drop by Allen in the third quarter and led an 80-yard drive moments later capped by Charbonnet's 1-yard TD run, and he hit Philips for another score with 8:53 to play.

Thompson-Robinson rushed for 102 yards and passed for 164 in another impressive all-around game after his signature collegiate performance last week against USC.

When asked afterward if the night was particularly emotional because he might be headed to the NFL, Thompson-Robinson indicated he hasn't decided whether he'll return to the Rose Bowl next year: “I have to go back and talk with my family. I'm just happy we got this moment, and I'm going to take tonight to enjoy it with my teammates.”

As for the Bruins' bowl destination, the Las Vegas native is unequivocal in his preference.

“Vegas? Most definitely," Thompson-Robinson said. “Speak it into existence. I would love to go home.”

California: With one game left, the Bears are stuck in mediocrity for another season under fifth-year head coach Wilcox, who must be frustrated by the COVID-19 obstacles put in his program's way in Berkeley during an otherwise solid second half of the season. His future is uncertain given his 25-28 record, and with Washington — where he was the defensive coordinator from 2012-13 — needing a new head coach.

UCLA: The Bruins completed their first winning season under Kelly with another solid victory, although they haven’t yet won over their fans and alumni. Just 36,156 turned out on a chilly night in Arroyo Seco, capping a season of low attendance at the Rose Bowl. That's largely because of the disappointment of Kelly's previous three losing seasons, but the well-paid coach finally is turning the tide.

California: USC visits Strawberry Canyon for the seven-loss schools' season finale on Saturday night in a game postponed from mid-November.

UCLA: Its first bowl game since 2017, most likely the Sun Bowl or Las Vegas Bowl.