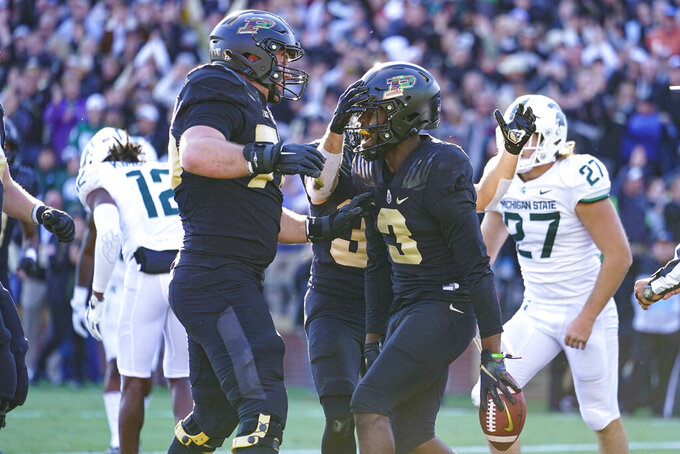 COLUMBUS, Ohio (AP) — The handful of current Ohio State upperclassmen who were on the roster then shudder at the memory of the last time the Buckeyes played an evidently overmatched Purdue team.

The 2018 game ended in a shocking 49-20 upset by the unranked Boilermakers, dealing Urban Meyer's previously unbeaten and second-ranked squad its only loss of the season and ultimately keeping it out of the College Football Playoff.

On Saturday afternoon in Ohio Stadium, they'll face Purdue for the first time since then.

“Everybody knows that was a big loss, an unexpected loss, really,” said senior cornerback Sevyn Banks, who was a freshman in 2018.

“We definitely got to get it right,” he said.

The 2018 Purdue debacle has been a "talking point” among his teammates this week, said cornerback Marcus Williamson, who was on the 2018 roster but out with a shoulder injury.

The No. 6 Buckeyes (8-1, 6-0, No. 5 CFP) shouldn't be caught by surprise this time, even though they will come in as a three-touchdown favorite, according to FanDuel Sportsbook.

Purdue (6-3, 4-2 Big Ten) has won three of its last four, including a 40-29 upset of previously unbeaten Michigan State last week.

“When we get into a rhythm and are aggressive, we can do some good things,” Purdue coach Jeff Brohm said. “I do think we're not afraid of the challenge, and we look forward to tough opponents and seeing how we match up.”

The Boilermakers have worked themselves right back into the crowded mix atop the Big Ten West. Purdue, Wisconsin, Iowa and Minnesota are tied with 4-2 divisional records.

“They're playing for a chance to go to Indy,” Ohio State coach Ryan Day said. “They certainly have our attention."

That was the Buckeyes' 24th straight Big Ten win since the 2018 Purdue setback.

“It doesn’t matter how it looks, we just got to win,” Day said. “If we keep winning, then a lot of good things are going to happen.”

Ohio State star receiver Garrett Wilson was unavailable for last week's game for unspecified reasons. Day said Wilson was practicing this week, which could indicate that he will play on Saturday. Jaxon Smith Njigba stepped up in his absence, making a career-high 15 catches for 240 yards and a touchdown against Nebraska.

Quarterback Jack Miller III remains suspended after being arrested on suspicion of drunken driving last Friday morning. The redshirt freshman was the third-string QB behind Stroud and Kyle McCord. Miller has played in four games in mop-up duty.

Purdue has already upset two Top 5 teams this season, upending then-No. 2 Iowa and then knocking off then-No. 5 Michigan State last week. The 2018 win over the Buckeyes was the first time the Boilers took down a team ranked that high since 1984. The victim that time? Then-No. 2 Ohio State. Unranked Purdue teams have beaten a top-five foe 17 times, an FBS record.

Purdue’s season is coming with all sorts of milestones. On Tuesday, the Boilermakers made their first appearance in the CFP rankings, at No. 19. A win Saturday would give them their first season with four road wins since 1943.

Buckeyes defensive tackle Haskell Garrett and linebacker Teradja Mitchell got limited playing time last week, but Day wouldn't be specific about what is keeping the senior team captains on the sideline.

“There's a little bit of everything going on there,” Day said.