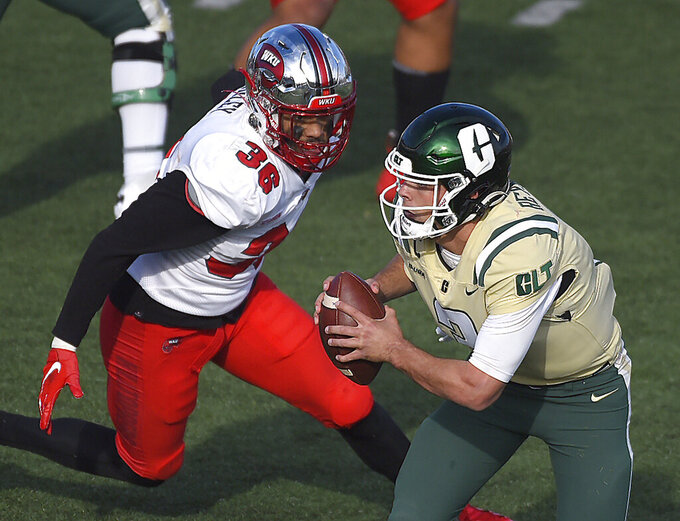 Charlotte quarterback Chris Reynolds, right, scrambles out of the pocket looking to pass as he is chased by Western Kentucky linebacker Kyle Bailey, left, during the second half of an NCAA college football game on Sunday, Dec. 6, 2020. (Jeff Siner/The Charlotte Observer via AP)

CHARLOTTE, N.C. (AP) — Tyrrell Pigrome had 218 yards passing with a touchdown and 60 yards rushing, Brayden Narveson made two field goals over 45 yards and the Hilltoppers beat Charlotte 37-19 in a rare Sunday contest.

Western Kentucky scored the first 17 points of the game in some unconventional ways. Special teams player A.J. Brathwaite Jr. recovered a botched punt attempt in the end zone and offensive lineman Jordan Meredith gathered a loose ball in the end zone after a fumble by teammate Gaej Walker.

Walker added 98 yards on the ground for Western Kentucky (5-6, 4-3 Conference USA). Pigrome was 18-of-27 passing and he carried it eight times.

Chris Reynolds passed for 205 yards with two touchdowns for Charlotte (2-4, 2-2). Two of Micaleous Elder's four catches were for touchdowns.

The game was initially scheduled for Saturday, Nov. 28 and bumped to Tuesday, Dec. 1 but was unable to be played. It was WKU's second Sunday game in program history — with the first against Arkansas State in the 1952 Refrigerator Bowl.