Arizona State looking to bounce back against E. Michigan 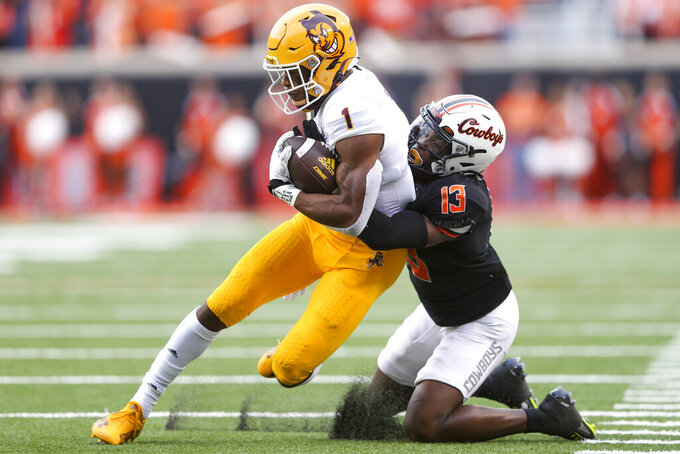 Line: Arizona State by 20 1/2, according to FanDuel Sportsbook.

Arizona State is looking to bounce back from a 34-17 loss at No. 8 Oklahoma State and avoid a slipup against the Eagles of the Mid-American Conference. The Sun Devils struggled defensively in Stillwater, giving up 465 total yards while allowing the Cowboys to pull away after cutting a 14-point deficit to 20-17. The Eagles had a similar second-half letdown against Louisiana last week, allowing the Ragin' Cajuns to score all 49 of their points in 28-point loss.

Arizona State's passing game vs. Eastern Michigan's defense. The Sun Devils struggled with protection against Oklahoma State. QB Emory Jones was sacked three times and finished 12 for 24 for 223 yards against the pressure. Eastern Michigan has struggled against the pass so far this season, allowing 330.5 yards per game. It could be a long night for the Eagles if Jones and the Sun Devils get into a rhythm.

Arizona State: RB Xazavian Halladay. The active FBS leader in career rushing yards has had an immediate impact in the desert after transferring from Wyoming. Halladay ran for 116 yards and two TDs against Northern Arizona in the season opener and had 118 yards and a TD last week.

Arizona State has rushed for at least 100 yards in 20 straight games, its longest stretch since a 23-game run in 1995-96. ... Eastern Michigan coach Chris Creighton has led his team to three Power Five wins since 2017, including a victory over Illinois in 2019. ... The Sun Devils haven't allowed a play of 50 or more yards in 17 games, the longest active streak in the nation. ... Eastern Michigan has scored on all eight trips inside the red zone this season. ... Arizona State LB Merlin Robertson has 27 missed tackles in 2,612 attempts, second-fewest of an FBS linebacker with at least 2,000 snaps the past four seasons.