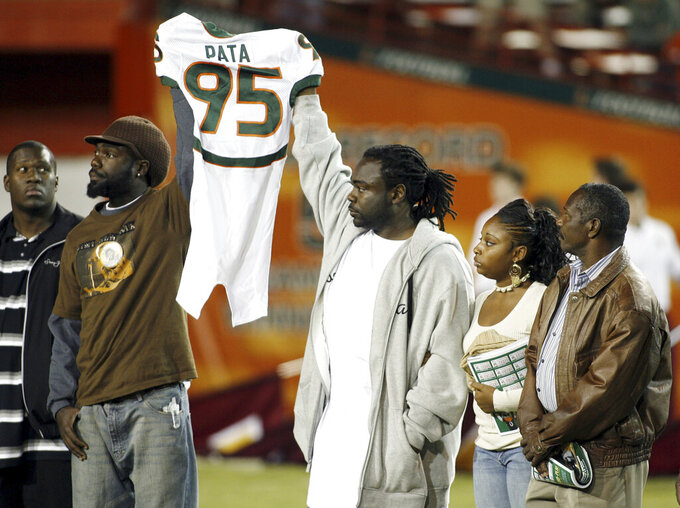 FILE - In this Nov. 23, 2006, file photo, Bryan Pata's family hold up his jersey at the beginning of an NCAA college football game between Miami and Boston College at the Orange Bowl in Miami. Rashaun Jones, 35, of Lake City, a former University of Miami football player was arrested Thursday, Aug. 19, 2021, in connection with the 2006 fatal shooting of his teammate Bryan Pata. Pata, a 22-year-old, 6-foot-4, 280-pound defensive lineman, was shot several times outside of his Kendall, Fla., apartment the night of Nov. 7, 2006. (AP Photo/Luis M. Alvarez, File) 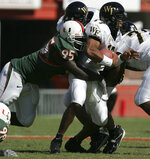 MIAMI (AP) — A former University of Miami football player was arrested Thursday in connection with the 2006 fatal shooting of his teammate Bryan Pata.

“The Pata family has waited a long time to see the individual they had believed involved in Brian’s death arrested and charged,” Miami-Dade State Attorney Katherine Fernandez Rundle said in a statement. “While the time needed to build sufficient evidence to ethically charge in a homicide can sometimes feel endless, families should know that the passion and determination of police and prosecutors to resolve unsolved cases does not diminish."

Pata was expected to be an early pick in the 2007 NFL Draft following his fourth and final season with the Hurricanes. The 22-year-old, 6-foot-4, 280-pound defensive lineman was shot several times outside of his Kendall apartment the night of Nov. 7, 2006. Pata had been returning from campus in his black Infiniti. Some witnesses claimed to hear arguing and then gunshots. Despite having hundreds of dollars in his wallet, neither the car nor the cash were taken.

Investigators said they learned through numerous interviews that Pata and Jones, who played three seasons with the Hurricanes, had experienced confrontations before the shooting. Pata previously beat his teammate during a physical altercation, officials said. And Pata's brother told investigators that Jones had threatened to shoot Pata two months before his death. Despite the urging of his brother, Pata never reported the threat.

Jones was being held in Marion County, awaiting extradition to Miami-Dade. It was not immediately clear whether he has an attorney who could comment. Marion County is located about 70 miles (110 kilometers) northwest of Orlando.