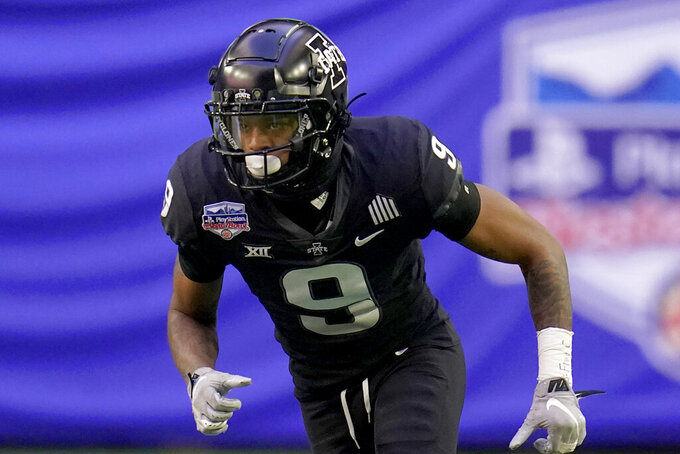 Some things to watch during the opening week in the Big 12 Conference:

West Virginia at No. 17 Pittsburgh. “The Backyard Brawl” will be played Thursday night for the first time since 2011, which was the last season the Mountaineers and Panthers were in the Big East Conference together. West Virginia joined the Big 12 the following year. There have been 104 games between the border-state rivals in the series that began in 1895, and was played every season between 1943 and 2011. Neal Brown goes into his fourth season as West Virginia's coach with a 17-18 record. He has turned over play-calling duties to new offensive coordinator Graham Harrell, and the Mountaineers also have a new starting quarterback. JT Daniels, the Georgia transfer who didn't get on campus until after spring drills, won the job in fall camp.

New TCU strong safety Mark Perry visits Colorado in the Horned Frogs' first Friday night opener since 2011. Perry played for the Buffaloes the past three seasons, leading them last year with three interceptions while being their third-leading tackler (72). Colorado's top two receivers from last season also transferred, but former Baylor receiver R.J. Sneed joined the Buffaloes as a graduate transfer after 133 catches for 1,564 yards and eight touchdowns in the Big 12.

No. 10 Baylor has forced 44 turnovers (31 interceptions) in its 23 games since Dave Aranda became head coach. The reigning Big 12 champion Bears led the Big 12 last season with 27 forced turnovers. ... Oklahoma State coach Mike Gundy goes into the opener of his 18th season with a 149-69 record. If the 12th-ranked Cowboys win at home Thursday night against Central Michigan, Gundy would join Alabama's Nick Saban, Iowa's Kirk Ferentz and Clemson's Dabo Swinney as the only active FBS coaches with 150 career wins. ... Iowa State defensive end Will McDonald IV, a preseason AP All-American, has 22 sacks over the last two seasons. ... Oklahoma is the only Power Five team without a losing season since 2000, the year the Sooners won the national championship. Their 239 wins are the most among FBS teams over that span, two more than Ohio State and 10 more than Alabama.

Before a broken clavicle early last season at UCF, Gabriel threw 32 TDs and averaged 373.9 yards of total offense per game in 2020. Martinez had 10,792 total yards (8,491 passing, 2,301 rushing) and 80 TDs (45 passing, 35 rushing) in his four seasons at Nebraska. Ewers, a top-rated recruit before spending a season at Ohio State, returned to his home state in the spring.