Big 12 players expected to have impact seasons in 2022 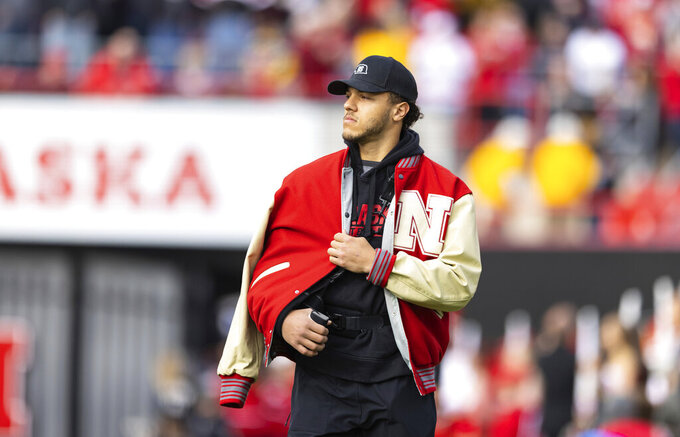 FILE - With his right arm in a sling following shoulder surgery earlier in the week, Nebraska quarterback Adrian Martinez walks onto the field during the tunnel walk before an NCAA college football game against Iowa on Friday, Nov. 26, 2021, at Memorial Stadium in Lincoln, Neb. The success or failure of the Wildcats next season rests largely on whether Adrian Martinez, a four-year starter at Nebraska, is able to bounce back from offseason shoulder surgery and eliminate the interceptions and other mistakes that relegated him to mediocrity with the Cornhuskers. (AP Photo/Rebecca S. Gratz, File)

Some Big 12 Conference players to watch next season:

BAYLOR: Redshirt sophomore Lorando Johnson, a former four-star recruit known as “Snaxx,” is expected to take over the hybrid linebacker-defensive back spot in the Bears defense. Jalen Pitre was the Big 12 defensive player of the year in that role last season. Johnson had only four tackles in eight games last season, and his only start was in the Sugar Bowl when the Bears opened in a dime package with six defensive backs.

IOWA STATE: Sophomore Hunter Dekkers is in line to take over for Brock Purdy, the winningest QB in school history who set 32 school records while starting the last 46 games. The 6-foot-3, 235-pound Dekkers spent the last two seasons as Purdy’s backup. Dekkers played in four games in 2021, completing 20 of 36 passes for 193 yards and two touchdowns. He also rushed for 61 yards and two touchdowns on four carries. Dekkers is a former four-star recruit out of Hawarden, Iowa, where he broke Iowa high school career records with 10,628 yards and 126 touchdowns passing.

KANSAS: Minnesota transfer Ky Thomas and Nebraska transfer Sevion Morrison join Devin Neal in giving the Jayhawks one of the better running back groups in the Big 12 next season. They’ll need all three of them to contribute, too, given the mediocre play of the Kansas offensive line in recent years and lingering questions at quarterback.

KANSAS STATE: The success or failure of the Wildcats in 2022 rests largely on whether Adrian Martinez, a four-year starter at Nebraska, is able to bounce back from offseason shoulder surgery and eliminate the interceptions and other mistakes that relegated him to mediocrity with the Cornhuskers. The shoulder appears to be ahead of schedule and that’s good news given the dearth of other replacements for the departed Skylar Thompson.

OKLAHOMA: Junior wide receiver Marvin Mims is one of the best players who stayed after coach Lincoln Riley left for USC, and the speedster should be a primary target for transfer quarterback Dillon Gabriel. Mims was one of the most electrifying players in the Big 12 last season, averaging 22 yards on 32 receptions.

OKLAHOMA STATE: Redshirt senior quarterback Spencer Sanders could be one of the nation’s best players if he can avoid mistakes. He threw four interceptions in a Big 12 title game loss to Baylor and then passed for 371 yards and ran for 125 in a win over Notre Dame in the Fiesta Bowl. He passed for 2,839 yards and ran for 668 last season.

TCU: Wide receiver Quentin Johnston averaged 22.1 yards per catch in 2020, the best ever for a Big 12 true freshman with at least 20 catches. He followed that up by averaging 19.2 yards per catch and having three 100-yard receiving games last season. He had 33 catches for 634 yards and six TDs despite missing three games injured. Johnston could be in for even bigger numbers with new coach Sonny Dykes, who likes his teams to throw the ball a lot.

TEXAS: Quarterback will drive the narrative for the Longhorns, but junior running back Bijan Robinson will drive the offense. He was one of the top backs in the country in 2021 before his season was cut short by a dislocated elbow in a loss to Kansas. Robinson had 1,422 yards from scrimmage and 16 TDs last season and will likely be mentioned in some early Heisman Trophy conversations. He’s also bulked up to 220 pounds heading into what will likely be his final college season. Robinson will run behind a young and inexperienced offensive line.

TEXAS TECH: Tyree Wilson started all 13 games at defensive end last season, and led the team with seven sacks and 13 1/2 tackles for loss. The 6-foot-6, 275-pound Wilson will now get a standing start as an outside linebacker. New coach Joey McGuire said Wilson will be on the edge more, giving the Red Raiders a chance to best utilize his speed and pass-rushing abilities.

WEST VIRGINIA: Defensive tackle Dante Stills is looking to mirror a 2021 season in which he was named to the All-Big 12 first team with seven sacks and 15 tackles for loss. The 6-4, 280-pound senior's presence takes on added importance this season after the transfers of several key players, including nose guard Akheem Mesidor, cornerback Nicktroy Fortune and linebacker Josh Chandler-Semedo, the team’s leading tackler.