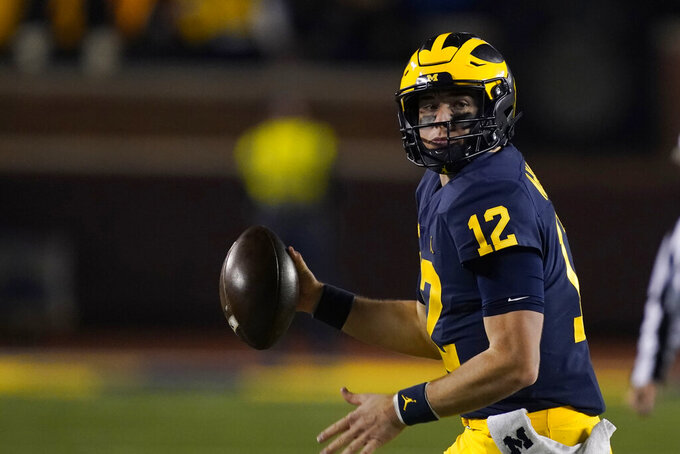 Things to watch during Week 11 of play in the Big Ten Conference:

With Penn State (6-3, 3-3) out of the East Division race, the pressure is on Jim Harbaugh and the Wolverines (8-1, 5-1, No. 6 CFP). Michigan needs to win in Happy Valley and next week at Maryland to set up a home showdown with Ohio State that likely will decide who goes to the conference championship game — though Michigan State could have something to say about that, too. Harbaugh has lost two straight against Penn State and is 3-3 in the series.

Minnesota at No. 19 Iowa

This could be a slog in Iowa City, but it will begin the process of separating the top of the Big Ten West. The Gophers (6-3, 4-2) and Hawkeyes (7-2, 4-2, No. 20 CFP) are among four teams tied for first place. The Gophers are coming off a home loss to Illinois, they're short of running backs and QB Tanner Morgan has been up and down all season. The Hawkeyes are expected to have a new starting QB in Alex Padilla and need this one badly because fellow West co-leaders Purdue and Wisconsin own the first tiebreaker (head-to-head wins) over them.

Michigan State DE Jacub Panasiuk will play a key role in the Spartans' attempt to pressure Maryland's Taulia Tagovailoa. Panasiuk is the top sack man on a defense that's second in the Big Ten with just over three a game, but he hasn't gotten to the quarterback in two games. The Spartans (8-1, 5-1, No. 7 CFP) gave up more than 500 yards in each of those games, and Tagovailoa is capable of putting up big numbers for the Terrapins (5-4, 2-4) if given time.