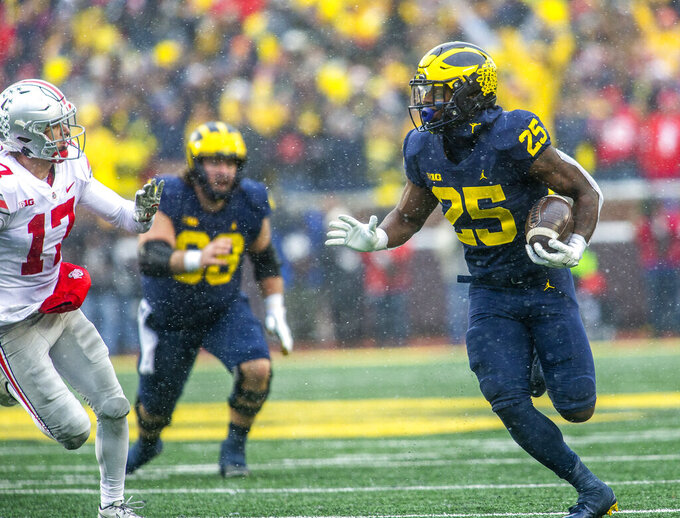 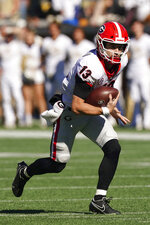 —Stetson Bennett, Georgia, passed for 255 yards and four touchdowns, and the No. 1 Bulldogs finished their undefeated regular season with a 45-0 victory over Georgia Tech.

—Ali Jennings III, Old Dominion, had nine catches for 252 yards and three TDs in a 56-34 win over Charlotte.

—Xavier Shepherd, Kennesaw State, had four TD runs and threw for another score in a 48-21 victory over Davidson.

—Bailey Zappe, Western Kentucky, threw for 328 yards and four touchdown TD passes in the second half in a 53-21 win over Marshall.

Jim Harbaugh got the win he wanted perhaps as desperately as any coach in sports.

Hassan Haskins matched a school record with five rushing touchdowns and Aidan Hutchinson had three sacks to break a single-season program mark, helping No. 6 Michigan finally beat No. 2 Ohio State 42-27 to give Harbaugh his first win as a coach against the Buckeyes.

The Wolverines clinched the Big Ten East and will play in the conference title game next week with playoff hopes in hand after snapping an eight-game losing streak to Ohio State.

Oklahoma's Bedlam and Big 12 run is over.

Spencer Sanders threw for a touchdown and ran for another and No. 7 Oklahoma State beat No. 10 Oklahoma 37-33 night to keep alive its College Football Playoff chances and stop the Sooners’ streak of Big 12 titles at six.

Oklahoma State snapped a six-game losing streak to Oklahoma. The Cowboys will play No. 9 Baylor next Saturday for the Big 12 championship.

Alabama came to life at just the right time.

John Metchie caught a scoring pass from Bryce Young in the fourth overtime to give No. 3 Alabama a 24-22 comeback victory over rival Auburn, rescuing the Crimson Tide’s national title hopes.

It was the first overtime in the Iron Bowl.

Freshman Kool-Aid McKinstry tipped away T.J. Finley’s pass in the final OT and Young hit Metchie just as he did in the previous one.

Alabama moves on to face No. 1 Georgia in the league championship game with its College Football Playoff hopes on the line. The Tigers dropped their fourth straight game after smothering Young and the Tide’s prolific offense most of the way.

6_Interceptions by South Dakota State in its 56-24 win over UC Davis.

14_Years since Duke last went winless in the ACC before going 0-8 this season.

30_Years since top-ranked Georgia finished the regular season undefeated before this year.