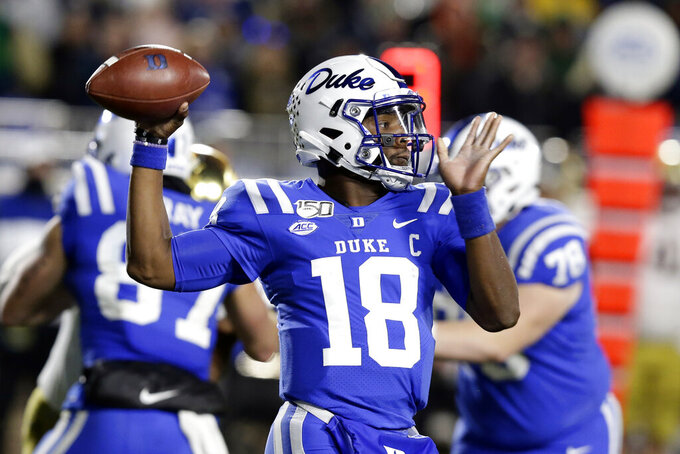 The Blue Devils play host to the Orange on Saturday in a cross-division matchup of desperate teams stumbling down the stretch.

Duke (4-5, 2-3 Atlantic Coast Conference) must win two of its final three games to qualify for its third straight bowl game, yet still has a mathematical shot at winning the chaotic Coastal Division.

And with Syracuse as the ACC’s only team winless in league play, this shapes up as a must-win for the Blue Devils, who visit Wake Forest next week before playing host to resurgent Miami in the regular-season finale.

Defensive end Tre Hornbuckle said it “wasn’t fun watching other teams play in a bowl game” during his freshman season in 2016 — the last time Duke missed the postseason — but Cutcliffe doesn’t want his players thinking too far ahead.

“Anybody that’s worried about a bowl game won’t be in our locker room,” Cutcliffe said.

The Orange (3-6, 0-5) seemingly view slumping Duke as its best chance to avoid becoming the second Atlantic Division team in two years to go without a victory in conference play, joining last year’s Louisville team. Syracuse — which has not beaten a team from a power conference — finishes the year at Louisville and at home against Wake Forest.

I think the biggest thing is that we need to get better,” coach Dino Babers said. “We need to be able to find improvement in certain areas and we’re striving to do that.”

Some other things to know about the Syracuse-Duke game:

The Orange rank last in the Bowl Subdivision in protecting their quarterback, allowing an average of 5 sacks. Syracuse has given up 35 sacks in its five ACC games, and four of its five league opponents have had at least seven sacks apiece. Duke ranks 10th in the league with an average of 2.4 sacks.

“We’re going to do whatever we can to get back there” to the quarterback, Hornbuckle said.

Duke’s offense has hit a slump, failing to score more than 17 points in any of its last three games after hitting the 30-point mark in five straight. Cutcliffe says there are three issues: Not producing enough of what Cutcliffe calls “efficiency plays” — plays of four or more yards that help keep the chains moving — plus struggling to convert third and fourth downs and turning the ball over. Duke is just 12 of 49 on third downs with 10 turnovers during its losing streak.

NO PICKS FOR YOU

Syracuse has a streak of 153 pass attempts without an interception and starting QB Tommy DeVito has 131 of them to rank third nationally. The last of DeVito’s five interceptions came on his final throw in a victory over Holy Cross of the FCS in late September — coincidentally, the Orange’s last win.

Duke will be without arguably its most important offensive lineman with center Jack Wohlabaugh out indefinitely after having ankle surgery earlier this week. Wohlabaugh had started every game, and now Cutcliffe says backup Will Taylor will slide into that job.