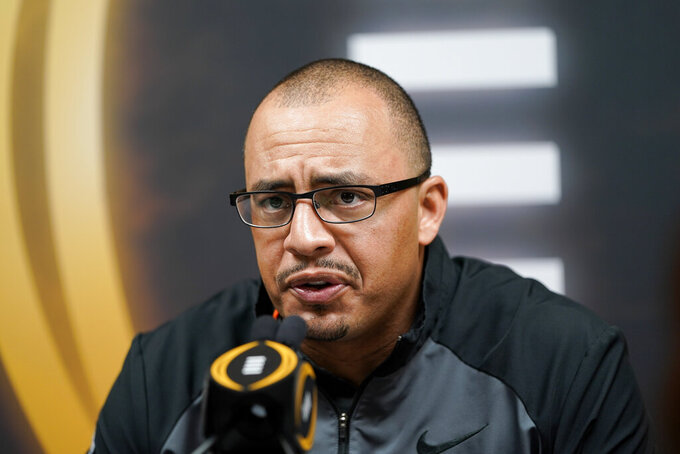 FILE - Clemson co-offensive ordinator Tony Elliott speaks during media day for the NCAA College Football Playoff national championship game in New Orleans, in this Saturday, Jan. 11, 2020, file photo. Clemson's Tony Elliott has joined college football's club of $2 million assistants. The school's board of trustees approved a $300,000 raise for the team's offensive coordinator, bumping up his total compensation to $2 million. Along with defensive coordinator Brent Venables, at $2.4 million a year, the Tigers are the only program in college football with both coordinators making that much, according to USA Today's database of assistant salaries. (AP Photo/David J. Phillip, File)

The school's board of trustees approved a $300,000 raise for the team's offensive coordinator, bumping his total compensation to $2 million starting July 1 when the university's new fiscal year begins. Along with defensive coordinator Brent Venables, at $2.4 million a year, the Tigers will be the only program in college football with both coordinators making that much, according to USA Today's database of assistant salaries.

Elliott also had his contract extended through the 2025 season, along will adding the title of assistant head coach.

Elliott's name came up for several NFL jobs and he was contacted in Tennessee's head coaching search. However, this latest move looks to keep Elliott at Clemson a while longer.

“We were so happy to retain coach Elliott. He had opportunities, but we wanted to make sure he stayed here,” Clemson athletic director Dan Radakovich said.

Elliott, a former Clemson receiver, has worked on the staff since 2011. He served as co-coordinator with Jeff Scott from 2015-19 until Scott left to become South Florida's head coach. Elliott took control by himself this past season.

The board also approved a raise for quarterbacks coach and passing game coordinator Brandon Streeter, increasing his salary by $25,000 to $615,000 a year.

Elliott and Streeter will continue leading one of the country's most productive offenses that will transition from quarterback Trevor Lawrence to DJ Uiagalelei next season.

The board also approved a $300,000 salary for new running backs coach and former Clemson ACC player of the year C.J. Spiller. Spiller was named to the latest class for the College Football Hall of Fame.

Spiller takes over for Elliott at that position group, while Elliott will coach tight ends going forward.

“To have C.J. out on the road recruiting and have him leading these young men day in and day out is something I’m really, really excited about,” Clemson coach Dabo Swinney said.

Spiller's contract is through the 2022 season.

Six other Clemson on-field assistants had their contracts extended a year through the 2022 season with no raises as the athletic department deals with a shortfall of about $25 million due to the coronavirus pandemic.

Longtime tight ends and special teams coach Danny Pearman moved to an off-field role as director of college scouting. Pearman was involved in a controversy last spring for past use of a racial slur in 2017. He apologized in June.

Pearman said he made a mistake in repeating "a racial slur I overheard when trying to stop the word from being used on the practice field,. What I overheard, I had no right to repeat.”