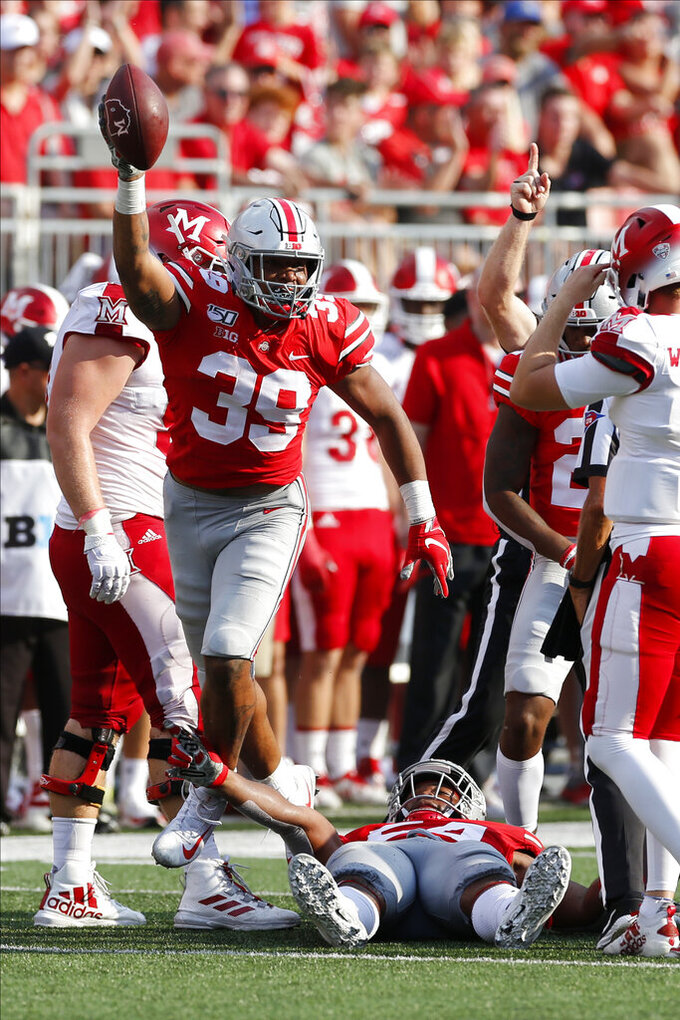 He might start to find out more next week.

The sixth-ranked Buckeyes (4-0, 1-0 Big Ten) trounced Miami (Ohio) 76-5 on Saturday and now prepare for a rugged stretch of Big Ten games beginning with a visit to Nebraska and then a home game against Michigan State.

One thing for sure is that quarterback Justin Fields is turning out to be something special.

The sophomore Georgia transfer threw four touchdown passes and rushed for two more scores in the second quarter alone before taking a seat and letting his two backups mop up in the second half. Fields has accounted for 19 touchdowns in the first four games.

The Buckeyes — victimized by an early Fields end-zone fumble and safety — only led 7-5 after the first quarter. But that changed quickly as Fields hit K.J. Hill with a 53-yard touchdown pass — the longest of his career — and then ran for a 7-yard score just 32 seconds later. It was all Ohio State the rest of the way.

Fields finished 14 for 21 for 223 yards, also throwing two touchdown passes to Chris Olave and another to Binjimen Victor .

"We defended him as well as we could," Miami coach Chuck Martin said. "We just couldn't get the big son of a gun on the ground."

Miami freshman quarterback Brett Gabbert was 5 for 15 for 48 yards and an interception before getting injured and leaving the game in favor of Jackson Williams in the second quarter. The RedHawks (1-3) were held to 130 total yards.

The game was suspended because of lightning with 2:40 left and then was declared over by consent of the two head coaches.

Fields committed his first turnover of the season when Miami linebacker Myles Reid batted the ball out his hand and it trickled out of the back of the end zone for a safety that gave the RedHawks an early lead. Miami kicked a field goal and led 5-0 before Ohio State scored the next 76 points.

"Coach always tells us we're eventually going to get punched in the face," he said. "It's just about how we respond."

Miami: The RedHawks, despite hanging tough in the opening quarter, are probably glad to have this one behind them. They didn't have the talent to keep it close.

"We got a good bounce early and that helped us early, and then they settled in," Martin said.

Ohio State: The Buckeyes are speeding along and flattening overmatched opponents. Fields continues to show his immense potential. The larger challenges are still ahead in the dog days of a tough Big Ten stretch.

Another blowout of an overmatched team likely isn't going to impress voters, even with gaudy numbers from Fields.

All-America defensive end Chase Young delivered two sacks, both of which led to Miami fumbles that the Buckeyes recovered. Young has recorded seven sacks this season.

"It was just a good, good defensive effort," Young said. "Hopefully we can try to do that against Nebraska."