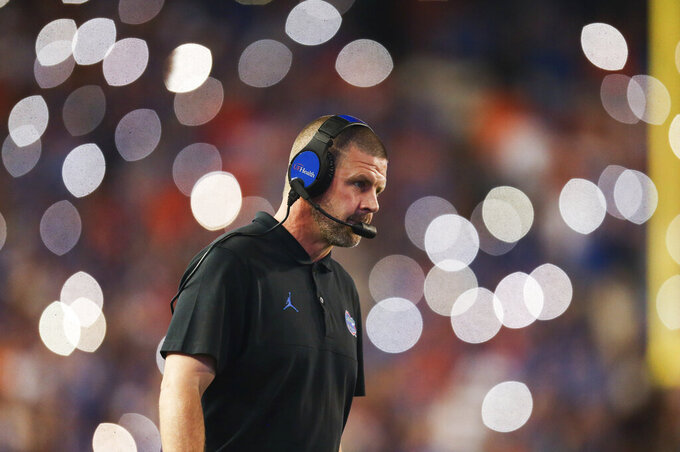 Florida head coach Billy Napier watches from the sideline during the second half of an NCAA college football game against South Carolina, Saturday, Nov. 12, 2022, in Gainesville, Fla. (AP Photo/Matt Stamey)

Florida is looking for a third straight victory to improve their position for bowl season. They have dominated this series, winning the last eight and 30 of the last 31. That includes 15 straight in Nashville. The Commodores can think of stringing together back-to-back league victories in the first of two consecutive home games to conclude the season.

Florida's run game against Vanderbilt's rushing defense with Anthony Richardson and running backs Trevor Etienne and Montrell Johnson Jr. The Gators have run for at lest 200 yards in five of their last six games, and they rank 11th nationally averaging 225.3 yards per game. Vanderbilt is giving up 164.3 yards rushing per game.

Florida: Richardson. He not only ranks second in FBS averaging 6.6 yards per carry among quarterbacks, Richardson has been at his best on the road where he is averaging 327 yards per game. That's fifth-best nationally.

Vanderbilt: QB Mike Wright or AJ Swann. Coach Clark Lea is being cagey, not naming a starter. He listed Wright, the quarterback who led the Commodores to their first SEC win since Oct. 19, 2019, at Kentucky, as the starter or Swann, the freshman who took over as the starter before leaving a loss to South Carolina with an injury.

Florida's last shutout came in the Gators' last game against Vanderbilt, 42-0 on Oct. 9, 2021. ... Florida has not allowed a point in six straight quarters. ... Florida averages 6.1 yards per rushing attempt. That's second in the nation and would tie the school record set in 2008. ... Florida has turned the ball over only once over 51 possessions in the last four games. ... Vanderbilt leads the SEC with three defensive touchdowns, tied for sixth nationally. ... Vanderbilt has recovered 10 fumbles this season and are tied for second in the SEC and 13th nationally in that category. ... Vanderbilt RB Ray Davis ran for 129 yards against Kentucky and ranks fourth in the SEC with 860 yards rushing this season.