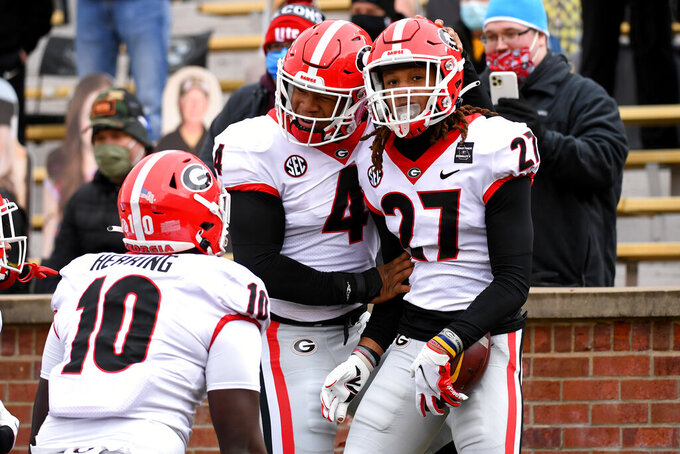 Georgia defensive back Eric Stokes (27) is congratulated by teammates Nolan Smith (4) and Malik Herring after intercepting a pass during the first half of an NCAA college football game against Missouri Saturday, Dec. 12, 2020, in Columbia, Mo. (AP Photo/L.G. Patterson)

ATHENS, Ga. (AP) — Georgia quarterback JT Daniels will be returning for another season between the hedges.

Daniels announced Tuesday on Twitter that he's coming back to the Bulldogs after starting the final four games of the 2020 season. Georgia won them all to finish 8-2, including a victory over Cincinnati in the Peach Bowl.

The quarterback revealed his plans as two teammates said they're heading to the NFL.

Defensive end Malik Herring and center Trey Hill announced on Twitter that they will give up their remaining eligibility to enter the draft.

Two others, running back James Cook and defensive lineman Devonte Wyatt, joined Daniels in confirming they'll be back in 2021.

After spending two seasons at Southern Cal, Daniels transferred to Georgia and was granted permission to play right away by the NCAA.

But he was still recovering from a season-ending knee injury sustained in the 2019 opener with the Trojans, prompting Georgia to go with two other quarterbacks before they finally turned to Daniels for a Nov. 21 game against Mississippi State.

He provided a huge spark to the passing game, completing 67 percent of his passes for 1,231 yards, and 10 touchdowns with just two interceptions the rest of the way.

While Daniels considered his NFL options, the consensus was he needed another year of college ball to further his development. He has played only five college games in the last two seasons.

Daniels will go into next season as Georgia's undisputed starter, meaning the Bulldogs won't have to rush the development of top recruit Brock Vandagriff, who would presumably be set to take over in 2022.

Herring is a senior who totaled 20 tackles in 10 games this season, including two sacks and 4.5 tackles for losses. He had a sack in Georgia’s victory over Cincinnati in the Peach Bowl.

“I have many great memories here at Georgia and Athens will always be home,” Herring wrote on his Twitter account.

Hill missed the final two games of the 2020 season with an injury.

“Playing in the NFL has been a lifelong goal and I am excited and grateful for the opportunity to follow my dreams,” Hill said on Twitter.

Cook was Georgia's second-leading rusher as a junior, rushing for 303 yards and three touchdowns He also caught 16 passes for 225 yards and two scores.

The younger brother of Minnesota Vikings running back Dalvin Cook missed the Peach Bowl after the death of their father.

Wyatt, who started all 10 games, is taking advantage of the NCAA's decision to grant an extra year of eligibility because of the pandemic. He had 25 tackles, two of them for losses.