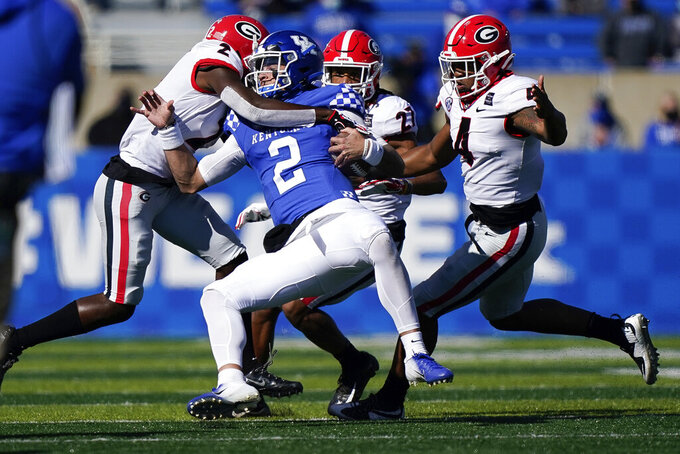 ATHENS, Ga. (AP) — Georgia star safety Richard LeCounte was injured in a motorcycle accident shortly after the Bulldogs returned to Athens from their victory at Kentucky.

LeCounte, one of the team's top defensive players, was taken to the trauma center at Piedmont Athens Regional Medical Center. He was still being treated Sunday, according to Ron Courson, the school's director of sports medicine.

“His injuries are not life-threatening and a full recovery is expected,” Courson said in a statement.

Courson did not say how long LeCounte might be out of action for No. 5 Georgia (4-1). The Bulldogs have a huge game next weekend, facing No. 8 Florida (3-1) in the annual “Cocktail Party” clash in Jacksonville.

LeCounte's mother, Erika Blocker-LeCounte, said her son was struck by two cars while driving his motorcycle Saturday night, just hours after the Bulldogs had flown home from their 14-3 victory over Kentucky.

LeCounte had a career-high 13 tackles and a fumble recovery in the game. For the season, he leads the team with three interceptions.

“He’s lucky to be alive,” Blocker-LeCounte told the Atlanta Journal-Constitution. “He was wearing his helmet and (that) saved his life.”

The Journal-Constitution said LeCounte sustained a shoulder injury, bruised ribs and several cuts and scrapes. He did not have any broken bones and no surgery will be required.

“God spared him his life, we can’t ask for more,” his mother said. “Glory to God.”

If LeCounte is out for an extended period, the Bulldogs will likely go with junior Christopher Smith at the safety spot.

After Saturday's game, LeCounte talked about how the defense was going to have to press on in the wake of injuries to several key players, including fellow safety Lewis Cine, who sustained an ankle injury.

“Sorry to say it, but it really is the next man up in this profession,” LeCounte said. “A couple of guys got dinged up and we’re ready to come back next week and fix what we need to fix. We have a lot of guys waiting to get the chance to show what they are able to do, and I’m excited for those guys."