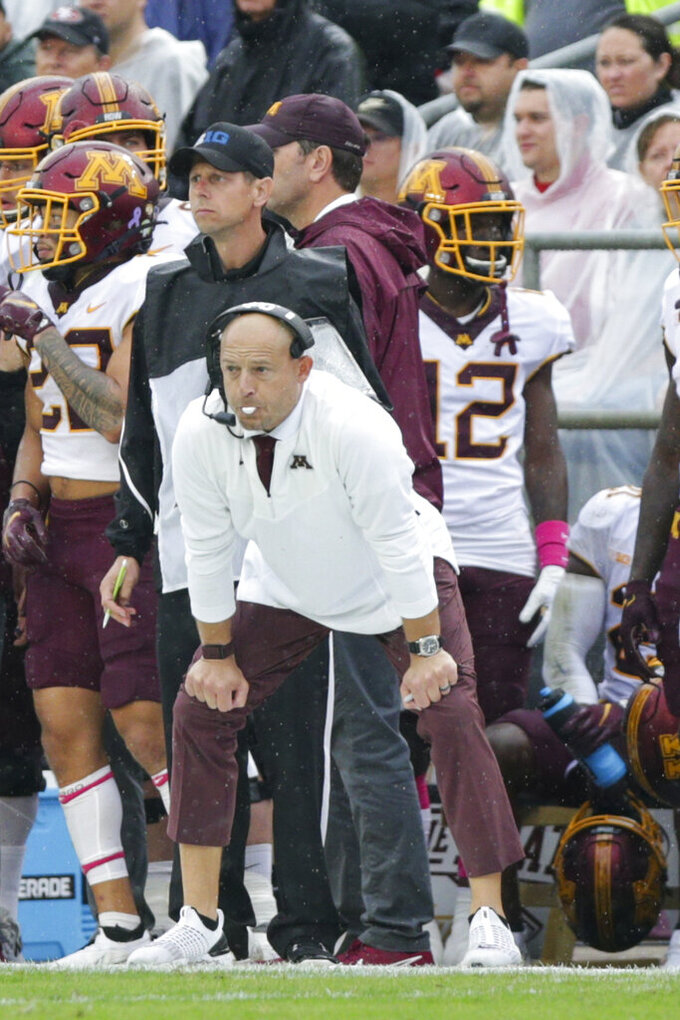 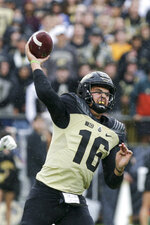 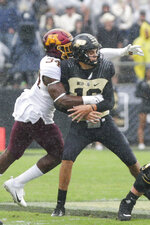 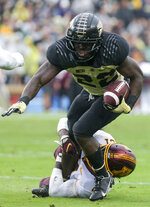 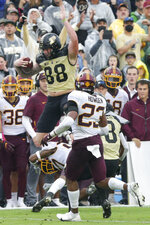 Trey Potts scored the go-ahead touchdown 70 seconds into the third quarter and the Golden Gophers defense pitched a second-half shutout to hold on for a 20-13 victory at Purdue.

“That was a very difficult week — mentally, physically, emotionally," coach P,J. Fleck said after earning his first second-half comeback in 50 career games at Minnesota. “To come out here and beat a really good Purdue team on the road, was great."

It was just what the Gophers (3-2, 1-1 Big Ten) needed after last week's shocking loss at home to Bowling Green.

But Minnesota cleaned up those mistakes and took advantage of their opportunities on a cool, rainy day at Ross-Ade Stadium — despite seeing the Boilermakers (3-2, 1-1) run 33 more plays and picking up 144 more yards.

How'd they do it?

After trailing most of the first half, the Gophers struck quickly in the third quarter. Tanner Morgan opened the second half with a 54-yard completion to Mike Brown-Stephens. Potts ran for 17 yards on the next play and then overpowered the Boilermakers defense for a 4-yard touchdown run for a 17-13 lead.

The Gophers defense took care of the rest. It ended one scoring threat with a sack, ended two more with good coverage and finally sealed the win with an interception on third-and-10 from just outside the Minnesota red zone.

“We weren’t very opportunistic in the red zone again," coach Jeff Brohm said after his fourth straight loss to Minnesota. “It’s something we’ve got to get better at — producing points when we get down in there tight. There were some things we did better but it wasn’t good enough."

Minnesota: It wasn't pretty and it certainly wasn't efficient. Still, the Gophers got what they needed — a road win. Morgan played well enough but needs to perform more consistently to loosen up defenses. Minnesota continues to look solid defensively. “It’s tough conditions and you know it’s going to be a low-scoring game," Fleck said. “I thought our guys made it a low-scoring game."

Purdue: Coach Jeff Brohm made the quarterback change and got running back King Doerue and receiver David Bell back from injuries. But the Boilermakers again struggled to score and O'Connell's poorly timed sacks and final interception were significant miscues. Purdue must find a way to produce more points.

Minnesota: Fleck is now 1-17 with the Gophers when trailing at halftime. ... Potts ran 15 times for 78 yards while Morgan was 9 of 18 with 169 yards passing and one TD. He was not sacked. ... Brown-Stephens finished with two catches for 40 yards. Chris Autman-Bell had two catches for 40 yards and caught a 32-yard TD pass though replays appeared to show it could have been called incomplete.

Purdue: Aidan O’Connell replaced Jack Plummer at quarterback and went 33 of 51 with 357 yards, one TD and one interception. He was sacked four times and lost a fumble that led to Minnesota's first score. .. Bell had six catches for 120 yards and became the 12th player in school history with 2,000 career yards receiving. ... Milton Wright had six receptions, 91 yards and a 7-yard TD catch. ... King Doerue finished with 21 carries for 95 yards.

Minnesota: Linebacker Mariano Sori-Marin left in the first quarter with an undisclosed injury after a collision with a teammate. Safety Tyler Nubin left briefly but returned and picked off O'Connell's final pass.

Minnesota: Begins a two-game homestand next Saturday against Nebraska.

Purdue: Following next week's bye the Boilermakers visit No. 5 Iowa on Oct. 16.

By John Zenor 18 minutes ago
By Pete Iacobelli 2 hrs ago
3 hrs ago
By Ralph D. Russo 6 hrs ago
By Ken Powtak 19 hrs ago