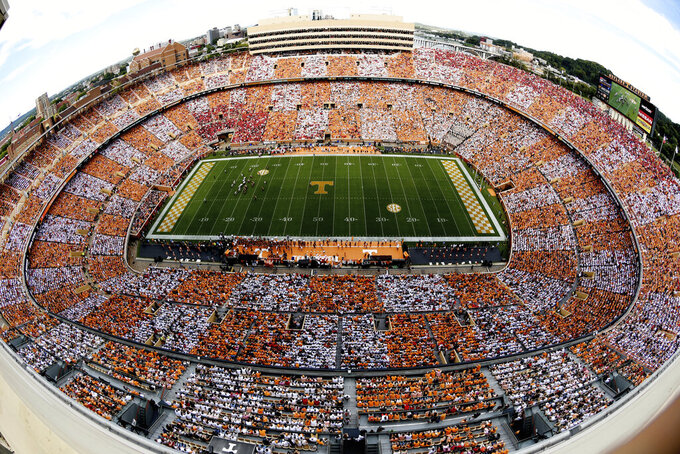 FILE - This Sept. 30, 2017, file photo shows Neyland Stadium during an NCAA college football game between Georgia and Tennessee, in Knoxville, Tenn. Tennessee will be celebrating the 100th year at Neyland Stadium all season long. The stadium currently seats 102,455, making it the fifth-largest in college football. (Michael Patrick/Knoxville News Sentinel via AP, File)

KNOXVILLE, Tenn. (AP) — Josh Heupel knows exactly what he walked into as the latest head football coach of the Tennessee Volunteers — a tradition-filled program that has struggled of late.

Tennessee has plenty of history with this the 125th season in school history. The Volunteers have won 13 Southeastern Conference football championships and count six national championships, the last in 1998. But their last SEC Eastern Division title came in 2007.

Heupel is the fifth different coach — not counting interim or acting coaches — since the end of the 2008 season. He takes over a program that went 3-7 last season and currently is in the midst of an NCAA investigation into the recruiting issues that cost Jeremy Pruitt and nine others their jobs in January.

The man who quarterbacked Oklahoma to a national title and who went 28-8 over the past three seasons at UCF sees opportunity in Knoxville. He has 14 starters back from a team that lost seven of its final eight games in 2020.

Tennessee's roster is very different after 13 scholarship players left for the transfer portal, which includes the Vols' top rusher, starting quarterback and top tackler. Eric Gray transferred to Oklahoma after averaging 85.8 yards rushing. Quarterback Jarrett Guarantano, who threw for a team-high 1,112 yards, now is at Washington State, and linebacker Henry To'o To'o went to rival Alabama. Five others were dismissed.

Also gone is top wide receiver Josh Palmer, though he was a third-round draft pick by the Los Angeles Chargers. The Vols lost a pair of starters on the offensive line with Trey Smith a sixth-round pick by the Kansas City Chiefs and Brandon Kennedy not returning after six years in college.

Heupel has a strong record of offensive success, and UCF ranked second in 2020 with 568.1 yards of total offense a game and eighth scoring 42.2 points a game. The Volunteers certainly can use an offensive boost after ranking just 108th in scoring with 21.5 points a game and 102nd nationally with 346.2 yards a game.

He has five starters back on offense and could have a new starter at quarterback. Harrison Bailey started the final three games last season as a freshman. But Heupel not only landed Milton as a transfer, he also added Hendon Hooker from Virginia Tech to boost competition at that spot.

Tennessee is celebrating the 100th year at Neyland Stadium all year long. The stadium currently seats 102,455, making it the fifth-largest in college football, after starting as Shields-Watkins Field in 1921 with seating for 3,200.

Heupel will have a chance at a quick turnaround if only because of this season's slate. The Vols open Sept. 2 hosting Bowling Green on Sept. 2 followed by visits from Pittsburgh and Tennessee Tech before their first SEC game. They wrap up their nonconference schedule Nov. 20 hosting South Alabama.

They have back-to-back road games starting Sept. 25 at Florida on Sept. 25 followed by a trip to Missouri on Oct. 2. They also visit Alabama on Oct. 23 and Kentucky on Nov. 6.