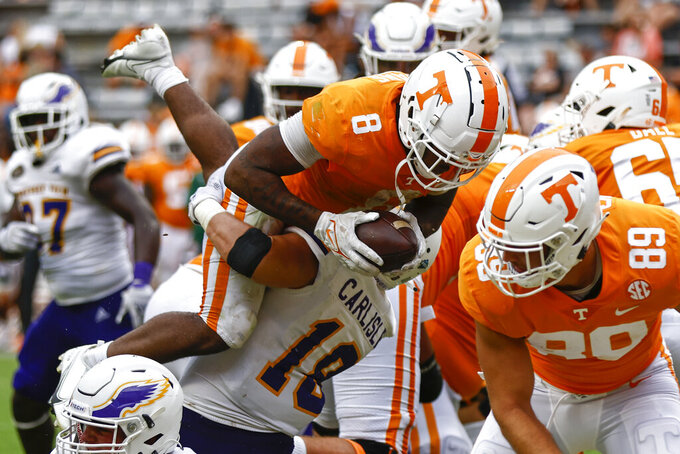 Tennessee running back Tiyon Evans (8) dives in for a touchdown as he's hit by Tennessee Tech linebacker Seth Carlisle (18) during the second half of an NCAA college football game Saturday, Sept. 18, 2021, in Knoxville, Tenn. (AP Photo/Wade Payne)

KNOXVILLE, Tenn. (AP) — Tennessee played Saturday's game with one eye on Tennessee Tech and the other on Florida.

Hendon Hooker threw for 199 yards and three touchdowns and ran for another, and the Volunteer defense came up with four interceptions in a 56-0 rout of the Golden Eagles (0-3).

The victory sets up Tennessee (2-1) for the start of its Southeastern Conference season next Saturday in The Swamp.

“The level of competition steps up next week,” Tennessee coach Josh Heupel said. “Our players are excited about that. I’ll transition to the following week pretty quick. I hope our players can do that.”

Hooker made his first start at quarterback for Tennessee in place of Joe Milton, who started the Vols' first two games. He was sidelined with a lower leg injury in the second quarter of last week's loss to Pittsburgh. Heupel said Milton was able to practice “mid-week” this week, and should be ready for next week.

“It was a pretty good showing,” said Hooker, a grad transfer from Virginia Tech. “I have to clean up some things in my intermediate game.”

“I am very proud of our Golden Eagle team," said Tennessee Tech coach Dewayne Alexander. "They played hard. The biggest challenge I gave our team was to play with Golden Eagle pride and play hard all four quarters, stay competitive and compete every single play. I thought our guys did that.

“You can’t turn the ball over the way we did. It’s something we have done three games in a row, turned the football over in our territory. Giving any team a short field is going to be tough,” Alexander said.

Tennessee's high-octane offense ran just 79 plays, a far cry from the 94 it ran against Bowling Green in the opener.

“Our pace isn't anywhere near where it's capable of being,” Heupel said. “We can be cleaner in the run game (202 yards). We're not maximizing things at the running back position.

Tennessee: What better way to get ready for the grind of the Southeastern Conference schedule than with a blowout victory? Tennessee got a lot of players in the game and some crucial ones found some much-needed confidence.

Alontae Taylor made a pre-game promise — now it's time for the company he represents to pay up.

The Tennessee cornerback said on social media that if he got an interception against Tennessee Tech, everybody would get two free cookies at Moonshine Mountain Cookies at either of the company's two Knoxville locations.

Quarterback Joe Milton, who came out of preseason camp as Tennessee's starter, didn't play Saturday. He sustained a lower leg injury in the second quarter of last week's loss to Pittsburgh. He didn't return against Pitt and he didn't play against Tennessee Tech. He was not dressed for the game,

Likewise, Jabari Small was hurt against Pitt. Tijon Evans was also injured and didn't suit up, leaving Jaylen Wright to carry most of the load. Evans turned to action against the Golden Eagles but Small did not.

Tennessee Tech quarterback Willie Miller left the game after a hard hit on a first-down run midway through the second quarter. Davis Shanley stepped in for him.

In three games this season, the Vols have outscored their opponents 38-0 in the first quarter.

They put up a pair of touchdowns against the Golden Eagles.

Tennessee: The Vols will begin their journey in the SEC next Saturday when they travel to The Swamp to play Florida.