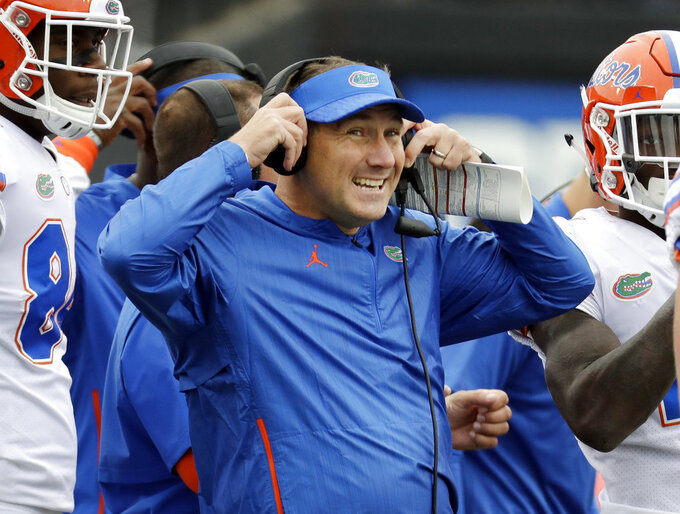 FILE - In this Saturday, Oct. 13, 2018, file photo, Florida head coach Dan Mullen watches from the sideline in the first half of an NCAA college football game against Vanderbilt in Nashville, Tenn. Mullen's Gators, the only team to beat LSU, have an earlier loss to Kentucky that could prove costly in the head-to-head competition depending on how the coming weeks play out. Florida (AP Photo/Mark Humphrey, File) 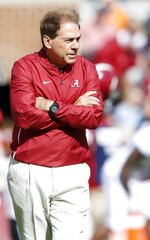 MONTGOMERY, Ala. (AP) — Now, the Southeastern Conference is getting down to the nitty gritty.

Starting with the World's Largest Outdoor Cocktail Party this weekend, the division title contenders will be meeting over the next two weeks to sort things out.

No. 7 Georgia and No. 9 Florida get the big stretch going Saturday in Jacksonville, Florida. Then, the Bulldogs and No. 12 Kentucky tangle to further settle what's now a three-way logjam in the SEC East.

And the SEC West's two top-5 teams, No. 4 LSU and No. 1 Alabama, face off in Baton Rouge to start off November after both have an open date this weekend.

At Alabama, the lone unbeaten team, coach Nick Saban knows how hard it is to stay that way down the stretch. He pointed out to his players that the Tide has now started 8-0 eight times since his arrival, and 2014 was the only undefeated team.

"We can be proud of what we've done so far, but it really doesn't matter from here on out," Alabama left tackle Jonah Williams said. "The way we define the season happens from here and January."

It's a harder road for some division contenders than others.

Georgia (6-1, 4-1) faces back to back games against the two East teams who have matched the Bulldogs' record.

The Bulldogs have had an extra week to regroup from a 36-16 loss to LSU that might have served as a wakeup call for the challenges ahead.

"I wouldn't say we needed one, but it definitely woke us up for sure," Georgia tailback Elijah Holyfield said. "We're awake and we know what's at stake now."

Dan Mullen's Gators, the only team to beat LSU, have an earlier loss to Kentucky that could prove costly in the head-to-head competition depending on how the coming weeks play out. Florida lost last year's meeting with Georgia 42-7 .

"I mean, rivalry games, you love winning because it's bragging rights for that year," Mullen said. "That's what makes rivalry games so much fun for the players and especially for all the fan bases. So, I understand that aspect of it being a big game, but is one game going to define our season or our program? Probably not, but it's still a lot of fun to go play in it."

The Tide has won the last seven meetings, but the Tigers feel confident things could be different this time against the defending national champions.

"This is a team that believes it can win and we can be on the field with Alabama," LSU defensive back Kristian Fulton said. "That's the biggest difference this year."

Here's a look at the contenders and their remaining schedules:

—LSU is the only remaining Alabama opponent currently in the Top 25, though Mississippi State and Auburn both had been ranked for much of the season. Auburn knocked the Tide out of SEC contention last season though 'Bama still made it into the playoffs and won a fifth national title under Saban.

"It's all about how you finish," Saban said.

—For Florida, Georgia is definitely the biggest remaining challenge. Then it's on to Missouri, South Carolina, Idaho and at Florida State. All five remaining games will be played in the state of Florida.

—Georgia is facing back-to-back-to-back big games. Survive Florida and Kentucky, and the Bulldogs appear in decent shape of winning out on their way back to Atlanta for a shot at repeating. They finish at home against Auburn and UMass before facing a 3-4 Georgia Tech team.

—Kentucky may have the easiest road, even with the home game against Georgia. The Wildcats face Missouri, Tennessee, Middle Tennessee and Louisville — teams with a combined 13-15 record.

"I think you'd have to be a moron to not realize the threat you're going to go up against with Missouri," Stoops said. The Tigers are 0-3 in SEC play, however.

—LSU's toughest remaining test post-Alabama figures to be No. 16 Texas A&M on the road Nov. 24. The other games are at Arkansas and home against Rice.

If LSU beats Alabama, Texas A&M could be right in the Western Division mix, too.

"I've been here for a while and I can tell you the culture is completely different now," LSU safety John Battle said. "Coach Orgeron brought it in and the guys have bought into it. The team morale is just extremely up right now versus the previous years. It's going to be an exciting game."