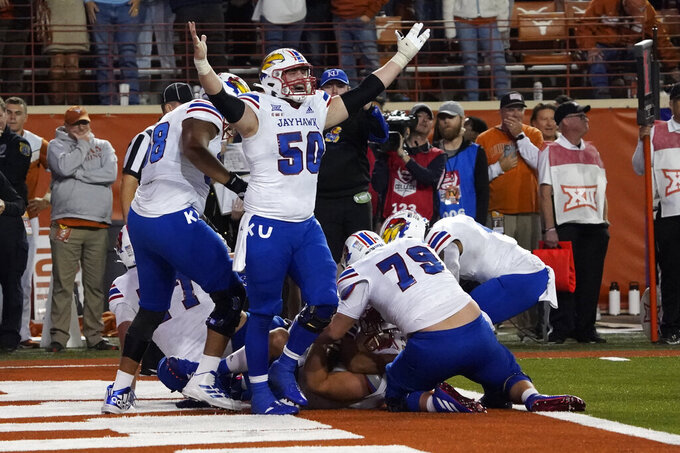 FORT WORTH, Texas (AP) — Kansas is coming back to Texas after ending a 56-game Big 12 road losing streak a week ago in the Lone Star State.

Since that victory was a potentially program-altering thriller in overtime at the Texas Longhorns, the Jayhawks face quite a task avoiding a letdown in a visit to TCU on Saturday.

“One of the first things I talked to them about was my concern about how they handled success,” coach Lance Leipold said. “If you want to continue to be successful and experience more of those feelings, what are you doing more than you did a week ago to get prepared?”

The Jayhawks were coming off a stirring performance in a 35-23 loss to 12th-ranked Oklahoma when they went to Stillwater and lost 55-3. TCU had just beaten No. 11 Baylor at home in the first game in 24 years without coach Gary Patterson on the sideline when the Horned Frogs got blown out by the Cowboys, 63-17.

“I’ve been basically talking to kids one right after the other to make sure we stay focused and talking to guys that need to step up more as leaders,” Kill said. “I’ve talked to our coaches and this is the best thing we can do is focus in on winning games.”

Kansas' 57-56 victory over Texas was a shining moment for walk-on tight end Jared Casey, who made a sliding catch in the end zone on the 2-point conversion when Leipold decided to go for the win.

“It’s a great story,” Leipold said of Casey's first career reception. “It kind of parallels this program in many ways, how you want guys to work hard and do what you ask and be ready when called upon. Some of the most unlikeliest guys get called upon at certain times.”

NO REDSHIRT FOR DANIELS

Leipold said quarterback Jalon Daniels would play, meaning the sophomore won't be eligible for a redshirt year. But he might not get the start with Jason Bean, the starter the first nine games, apparently available after missing the Texas game with an injury. Leipold declined to name a starter.

The decision on Daniels included conversations with the Californian's parents, and Leipold said it was Daniels' decision to play.

“We told the family that we would respect their decision on what they want to do,” Leipold said. “Talked with Jalon and he sees the momentum with what this team’s doing and what it’s done for our locker room and he’s all in to help us build this program. He wants to play.”

Whoever starts at quarterback for TCU will be nursing an injury.

Max Duggan, who started the first eight games and kept playing on a broken foot, could return after missing the past two games. Chandler Morris was injured in his second career start against Oklahoma State, and third-stringer Sam Jackson separated a shoulder against the Cowboys.

Kill said the issue with Duggan and Morris would be practice time, but indicated one of them would start.

The issue is similar at running back, with all the scholarship players battling injury. Kill said Zach Evans is at 80% with a toe injury. The lead back has missed four of the past five games.

Kill, the former Minnesota coach, was in his second season as an offensive assistant when Patterson and the school decided to end his tenure immediately Oct. 31. He said he still wanted to be involved in college football, but wasn't sure in what capacity. Kill said he bought land and won't stray far from Fort Worth.

“I mean, shoot, my daddy retired at 65 and retired at 65,” the 60-year-old said. “I ain’t ever retiring, I’ll tell you that. And I think the more busy you keep, the younger you stay. So, and I like being around young people. They make me younger.”