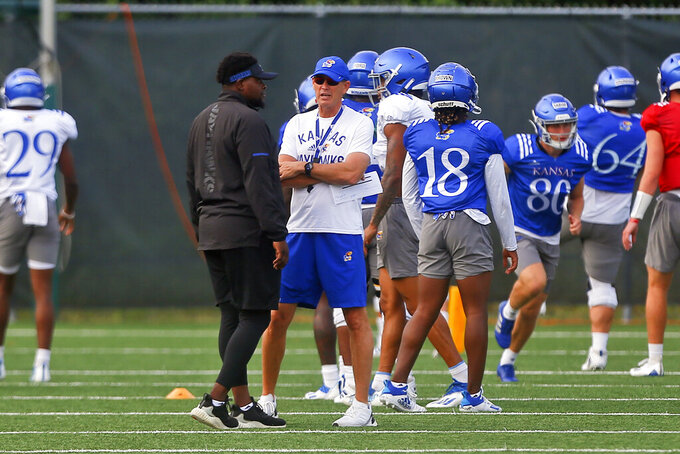 LAWRENCE, Kan. (AP) — There is never a good time to make a coaching change in college football, but the downtrodden Kansas program was forced into perhaps the most inconvenient of all: a month after national signing day, just as spring practices began.

That's when coach Les Miles, engulfed in controversy dating to his days at LSU, was forced out along with the man who hired him, athletic director Jeff Long. And by the time new AD Travis Goff pried Lance Leipold away from Buffalo, the Jayhawks were already looking forward to summer workouts and the eventual start of fall camp.

The timing of it all forced Leipold, the long-time small-college coach, to get creative in rebuilding his roster.

Not surprisingly, the transfer portal played a big role.

Now, most of the 12 transfers from Division I schools who arrived in Lawrence between last season and this season could see the field when the Jayhawks open the season against South Dakota on Friday night at Memorial Stadium.

“When the lights go on and the ball is kicked off, we'll truly get a baseline of where we're at — what we've done in our time here and where we need to go,” Leipold said this week. “There's I guess still unknowns, seeing how guys produce in game situations. How we handle adversity, how we handle success. I want to see us playing hard and giving good effort no matter what the score is. We're going to compete hard no matter who is on the field.”

It helps that Leipold knows well some of them already. Half of those 12 transfers from college football's top division came from Buffalo, choosing to follow their coach halfway across the country to rebuild a bottom-dwelling program. All appeared on the initial two-deep released Monday.

Trevor Wilson is one of the starting wide receivers after catching 16 passes for 319 yards and three scores while playing all seven games last season. Mike Novitsky is slated to start at center after starting every game at the position last season, helping to block for an offense that was second nationally in rushing. And right tackle Michael Ford Jr. is listed as co-starter after redshirting his freshman season with the bulls.

Among the backups are defensive tackles Eddie Wilson and Ronald McGee and linebacker Rich Miller.

“What helps us is they've been part of Coach Leipold's coaching,” Kansas defensive line coach Kwahn Drake said. “They've actually been kind of leaders, helping guys understand the checks and calls and systems.”

The six newcomers from Buffalo are joined by North Texas quarterback Jason Bean, who is in the running to start the season-opener against the Coyotes; Notre Dame offensive guard Colin Grunhard, the son of former Kansas City Chiefs offensive lineman Tim Grunhard; and Jeremy Webb, who spent time at Virginia Tech before playing at Missouri State last season.

That makes nine of the 12 transfers from Division I schools on the two-deep heading into the opener, with Texas Tech wide receiver Kevin Terry, Michigan linebacker Cornell Wheeler and Virginia Tech defensive end Zion DeBose the others.

Most of them are coming from successful programs, too. The Bulls were 6-1 playing an all-MAC schedule last season, Notre Dame went 10-2 and spent most of last season ranked in the top five and North Texas — with Bean leading the way at quarterback — wound up facing Appalachian State in the Myrtle Beach Bowl.

The Jayhawks? They were winless last season and haven't won more than three games in a season since 2009.