Karl Dorrell Era at Colorado kicks off against his old team 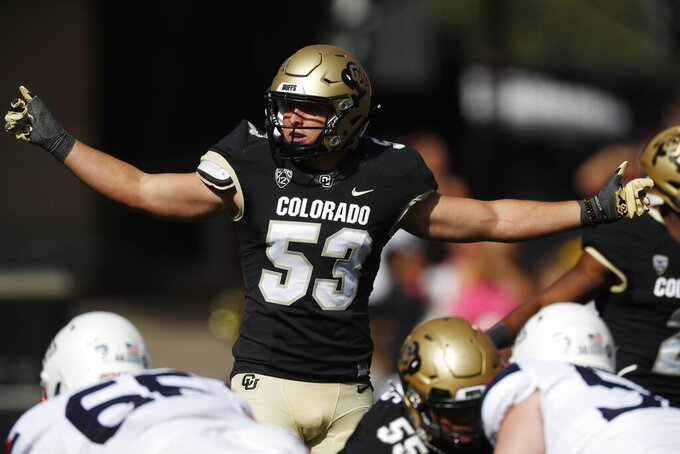 FILE - In this Oct. 5, 2019, file photo, Colorado's Nate Landman directs teammates in the first half of an NCAA college football game in Boulder, Colo. Senior inside linebacker Landman will again be one of the team’s leader. He has been voted Colorado’s defensive MVP for the past two seasons. (AP Photo/David Zalubowski, File)

BOULDER, Colo. (AP) — Karl Dorrell doesn’t attach any extra meaning to opening his Colorado head coaching chapter against a team that once let him go.

That was so long ago.

The Buffaloes will host his former school, UCLA, on Nov. 7 to kick off the Dorrell Era in Boulder. He's taking over for Mel Tucker, who surprisingly bolted for Michigan State in February after one season on campus.

The 56-year-old Dorrell has strong ties with the Bruins — first as a student-athlete and later as their head coach from 2003-07. He was shown the door after a 35-27 mark.

“It’s been a while, 13 years I guess, since I was on that sideline,” Dorrell said. “So I would say no special significance.”

Originally, the Buffaloes were slated to travel to Fort Collins to face rival Colorado State. But then the Pac-12 postponed the season due to the COVID-19 pandemic, before reversing course and instituting an abbreviated schedule.

It's been difficult to get to know his team with the virus scrubbing spring football and the various constraints over the summer.

He's not sweating the lack of in-person time with his team, though.

“So I learned that early on,” Dorrell added. “In this profession, in particular with this pandemic, you really have to have a mindset of controlling the things you can control. You can’t worry about things that are out of your control.”

Dorrell has bounced around the college circuit over his career, from being a graduate assistant (UCLA), receivers coach (Central Florida), offensive coordinator (Northern Arizona), passing game coordinator (Arizona State) and later head coach at UCLA. He’s also had several stops in the NFL, including last season as the receivers coach with the Miami Dolphins. He was promoted to assistant head coach just before taking the Colorado job.

This marks his second go-round in Boulder. He was an offensive coordinator with the Buffaloes from 1995-98, when the team earned bowl bids in three of his four seasons.

Colorado has only been to one bowl over the last dozen seasons. With Dorrell, the Buffaloes are on their third head coach (along with one interim) in three years.

“I just like how resilient everyone is,” defensive back Chris Miller said. “Nobody gets stuck in the past and whatever happened. Everybody is moving forward and everybody has the mindset to get better and to develop and just keep pursuing our goals, which is to win.”

Among Colorado’s returning lettermen is 33-year-old kicker James Stefanou, who grew up playing soccer in Australia before joining the Buffaloes. He's become one of the most accurate kickers in Colorado history.

Senior inside linebacker Nate Landman will again be one of the team’s leaders. He was voted Colorado’s defensive MVP last season after a 137-tackle campaign.

Tailback Alex Fontenot rushed for 874 yards and five scores a season ago. His offensive line includes junior offensive tackle Will Sherman, who has played in 24 career games with 21 starts.

The quarterback competition between Sam Noyer and Tyler Lytle has been tight all through fall camp. Dorrell is hoping to soon name a starter, but Lytle appears to be the favorite — at least according to betting odds (yep, there are lines for that).

The senior Noyer was re-recruited by the new coaching staff after intending to transfer.

Last season, Noyer started fall camp as one of the backups behind Steven Montez. But he and Tucker decided to switch him to safety.

Lytle was one of the backups last season. He played in three games and threw one pass. Dual-threat freshman Brendon Lewis also is making a strong case.

Before leaving for Michigan State, Tucker wanted to unretire the hallowed numbers of Byron White (No. 24), Joe Romig (No. 61) and Bobby Anderson (No. 11). The notion was scrubbed by Dorrell and the numbers will remain out of circulation.

“Because that’s where it should be,” Dorrell said.

The Buffaloes created a bubble-type environment to start fall camp by housing players in a hotel. Initially it was just for two weeks but it was extended until at least Sunday. Players are tested daily.

Due to the delayed start and a conference-only schedule, Colorado canceled games at Colorado State and Texas A&M, along with a home contest against Fresno State. It would have been Colorado's first visit to Fort Collins since 1996.