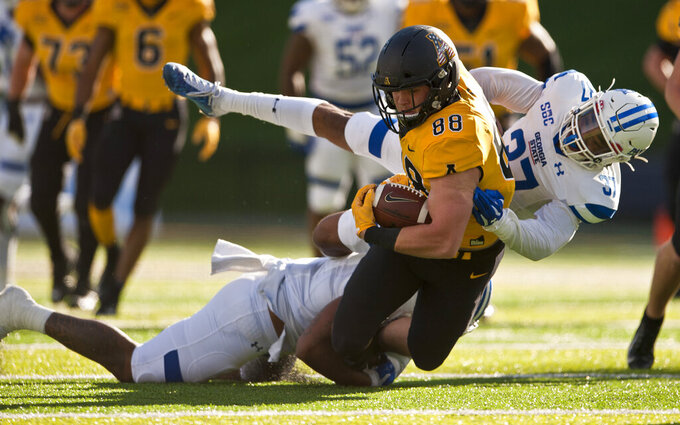 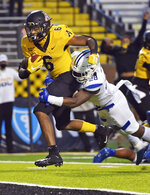 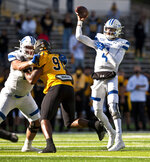 BOONE, N.C. (AP) — Camerun Peoples scored on a 10-yard touchdown run with just under five minutes remaining as Appalachian State came from behind for a 17-13 win, foiling an upset bid by Georgia State in a bruising game on Saturday.

Peoples dragged safety Chris Moore with him over the goal line.

The Mountaineers (6-1, 4-0 Sun Belt Conference) lost quarterback Zac Thomas to injury when he was tackled while scrambling out of bounds during the game-winning drive. Jacob Huesman came off the sidelines, promptly hit Peoples with a screen pass for 12 yards and finished an 11-play, 77-yard drive for App State's first lead of the game.

Georgia State led 10-3 at halftime, outgaining the Mountaineers 211 yards to 89.

The scrappy comeback sets up next week's nationally televised clash between Appalachian State and undefeated No. 15 Coastal Carolina for first place in the Sun Belt's East Division.

Thomas was transported to the hospital for evaluation. He completed 16 of 22 passes for 146 yards with a touchdown and an interception. He moved into fifth place for App State in career passing yards.

Georgia State held the Mountaineers to 131 yards rushing, well below the average of 283.2 per game that had them ranked No. 3 in the nation. Jordan Strachan recorded a sack of Thomas — a GSU season-record sixth.

The game was played before 2,170 fans in Kidd Brewer Stadium.