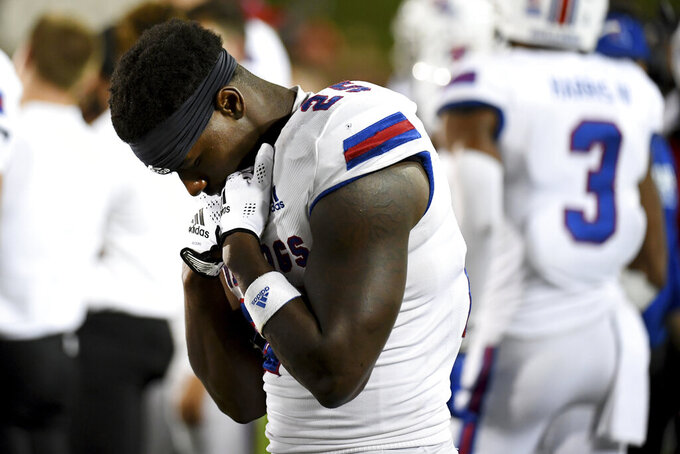 Louisiana Tech running back Greg Garner stands on the sideline during the second half of an NCAA college football game against Missouri Thursday, Sept. 1, in Columbia, Mo. (AP Photo/L.G. Patterson)

CLEMSON, S.C. (AP) — First-year Louisiana Tech coach Sonny Cumbie had a message for his players while prepping for No. 5 Clemson this week.

The Bulldogs have an opportunity to mark themselves alongside Appalachian State, Georgia Southern and Marshall, all Group of Five teams who took down top-10 opponents.

“If we are not excited to play this week, then I do not know if I can be in this locker room,” said Cumbie, who was Texas Tech’s offensive coordinator before taking the Bulldogs' job. “This is a great opportunity for us to go on the road against a great opponent.”

Louisiana Tech (1-1) takes on the Tigers (2-0) on Saturday night, trying to buck a whole bunch of positive Clemson streaks.

Clemson has won eight straight games, the longest current run in the Power Five. The Tigers haven’t lost at home since November 2016, a stretch of 35 straight. And they’ve won all three meetings against Louisiana Tech of Conference USA — all by sizeable margins.

The Bulldogs have already played a Power Five program, losing 52-24 at Missouri. Louisiana Tech passed for 336 yards on the SEC’s Tigers and think they can do the same on the Tigers from the ACC.

Clemson put on an awful defensive show in a 35-12 win over FCS Furman, where the Paladins outgained them, 386 to 374. The display angered Clemson coach Dabo Swinney so much, he didn’t designate any players of the week on that side of the ball.

“If you don’t have any fricken’ pride, you respond,” Swinney said. “If you don’t, you end up on the sideline. That’s just the way it is.”

MISSING DEFENDER: Clemson could be without standout defensive tackle Bryan Bresee this week after the death of his younger sister, 15-year-old Ella. Bresee went back to his home in Maryland after last week’s game when Ella had a setback in fighting an aggressive form of brain cancer. Byran Bresee announced his sister’s death Thursday. She was honored last week at Clemson as players and staff wore T-shirts with “Ella Strong” for Furman. Swinney said Bryan would “play if he wants to. He’s got more important things that he needs to focus on.”

BULLDOG BITS: Louisiana Tech is trying to regain its winning ways after going 8-19 the past two years. Before that, the Bulldogs posted six straight winning seasons under coach Skip Holtz, the son of national championship coach Lou Holtz. Cumbie was brought in to fire up the attack. The Bulldogs passed for 336 yards in a loss at Missouri and ran for 299 yards last week against Stephen F. Austin.

PLAYOFF HOMER: First-year Clemson athletic director Graham Neff is pleased College Football Playoff leaders have decided to expand to 12 teams, in large part because it could mean a home playoff game at Death Valley. There are no guarantees, Neff said, but he believes if the Tigers are seeded fifth through eighth, they would have an extra game that would be an economic boon to the area.

CLEMSON’S LEBRON?: Defensive tackle Ruke Orhorhoro has been a starter on the football field. According to him, he’s also far away the best basketball player on the team, saying some on the team compare him to LeBron James. Orhorhoro was a state basketball champion in high school and boasted about his exploits in pick-up games since coming to campus. “Put me at the 3-point line and I’ll make 100 out of 101 shots,” the 6-foot-4, 295-pound fourth-year player said. Tigers offensive lineman Jordan McFadden was asked if any of Orhorhoro’s claims were true. “No,” McFadden said with a smile.