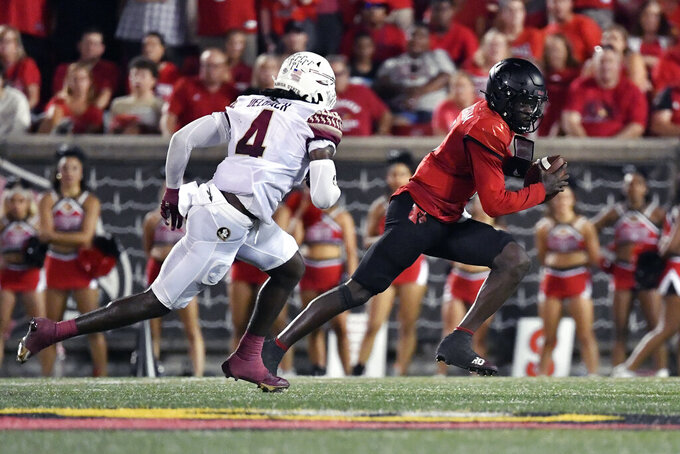 Line: Louisville by 13½ according to FanDuel.com Sportsbook.

Both teams look to rebound from close losses after leading in the fourth quarter. South Florida led then-No. 18 Florida 28-24 but allowed the go-ahead touchdown with 5:05 remaining to fall 31-28. Louisville was up 31-28 on Florida State before yielding a touchdown with 7:54 left in a 35-31 defeat that dropped the Cardinals to 0-2 in ACC play.

Louisville QB Malik Cunningham vs. USF’s defense. The Cardinals’ mobile signal caller poses a dual threat for any defense and has passed for 590 of his 872 total yards from scrimmage. However, he tossed just his first touchdown last week against Florida State. The upside is he tallied 360 total yards and three scores against the Seminoles. He’ll face a Bulls defense that held Gators QB Anthony Richardson to 112 yards passing and just 24 rushing, and Florida to 329 yards overall. Safety Mekhi LaPointe leads the team with 21 tackles.

USF: RB Brian Battie ranks third nationally in all-purpose yards with 183.0 per game. He has 269 rushing (41st) and 263 on kickoff returns. He’s coming off a career-best 150 yards rushing with a touchdown at Florida and has compiled consecutive 100-yard efforts for an attack averaging 204 yards per game (42nd).

Louisville: DE YaYa Diaby leads the team with 3.5 sacks and four tackles for loss totaling 19 yards. His 13 stops are tied for eighth on the team but he has keyed a Louisville pass rush that ranks 12th nationally in sacks and 22nd in TFL with 7.7 per contest.

USF has a 13-game road losing streak dating to Oct. 28, 2019, at East Carolina. ... Bulls QB Gerry Bohanon seeks his first passing TD against four interceptions. The Bulls rank sixth nationally in sacks allowed per game (0.33) and 19th with four interceptions. ... USF gained 402 yards offensively and didn’t yield a sack in Gainesville. ... Louisville is playing its first Saturday game since the opener at Syracuse. ... Cardinals wide receiver Dee Wiggins is out with a season-ending toe injury after catching two passes for 41 yards against FSU.