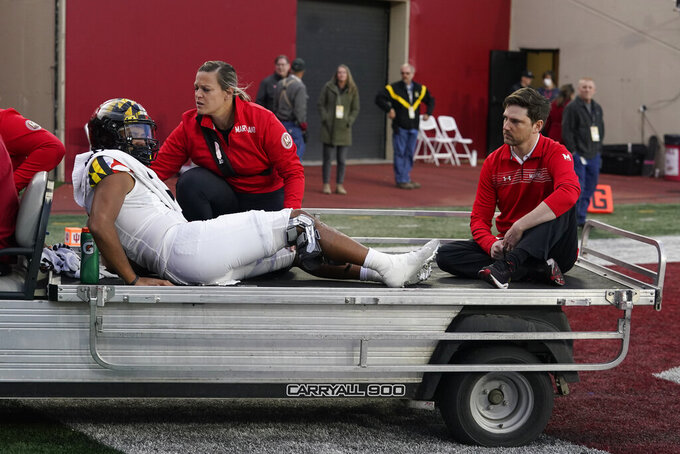 Maryland quarterback Taulia Tagovailoa, left, is carted off the field during the second half of an NCAA college football game against Indiana, Saturday, Oct. 15, 2022, in Bloomington, Ind. (AP Photo/Darron Cummings)

COLLEGE PARK, Md. (AP) — Taulia Tagovailoa appears to have avoided a major injury after he was carted off the field last weekend at Indiana.

Maryland coach Michael Locksley said Tuesday the standout quarterback reaggravated a previous sprain in his knee and that an MRI last weekend showed no further structural damage from when he was initially injured last month.

“A huge sense of relief, obviously,” Locksley said. “I stood there and watched him, the way it played out, it looked very painful. We're very thankful that he had the knee brace. He fights us. He didn't want to play in the knee brace for the past two, three weeks. We forced him to do it.”

Locksley said Tagovailoa would be a game time decision this Saturday against Northwestern.

Tagovailoa, whose brother Tua has missed time in the NFL recently following a head injury, left Saturday’s game against Indiana early in the fourth quarter. Backup Billy Edwards Jr. came in and led the Terrapins (5-2, 2-2 Big Ten) to a 38-33 victory.

Tagovailoa was injured against Michigan last month and returned for the next game. Locksley said Tuesday that Tagovailoa had a sprained MCL, which he aggravated against Indiana.

“He was able to make it back after the Michigan game with the same injury,” Locksley said. “It's all about how his body feels and recovers, and we'll continue to do the things necessary to keep his safety and health at the front of our decision.”

Tagovailoa has given Maryland some much-needed stability at quarterback the past couple seasons. He leads the Big Ten this year with 2,001 yards passing, and he has completed 72.5% of his throws.

“Just to know that he's healthy and good enough to play — that's just a great relief,” receiver Dontay Demus said. “He wants to go out there. He's a great competitor. Whether he was good or not, I believe in him and Billy, but I feel like having Taulia just gives us all-around 100% confidence in him.”