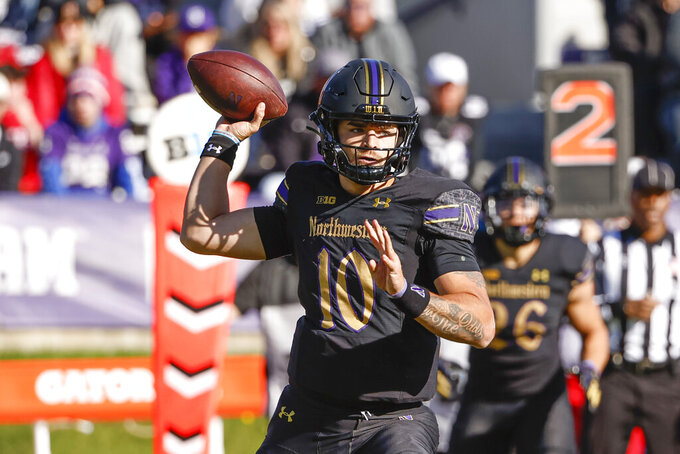 Northwestern quarterback Brendan Sullivan (10) looks to pass the ball against Wisconsin during the first half of an NCAA college football game on Saturday, Oct. 8, 2022, in Evanston, Ill. (AP Photo/Kamil Krzaczynski)

Line: Maryland by 14 1/2, according to FanDuel Sportsbook.

Maryland can reach bowl eligibility in October, which would say a lot about the program's progress in coach Michael Locksley's fourth season. Standout QB Taulia Tagovailoa left last weekend's game with a knee injury, so if he's unable to play, the snaps would go to backup Billy Edwards.

Northwestern RB Evan Hull vs. Maryland defensive front. Hull is averaging 149 all-purpose yards per game, and if he can help the Wildcats move the chains, it will limit the time Maryland's dangerous offense can be on the field.

Maryland: RB Roman Hemby has been a big-play threat in the running game and could be even more important this week if Tagovailoa is limited.

Maryland is the only FBS team that has scored on its first drive in every game this season. The Terps have five touchdowns and two field goals on their opening drives. ... Hull is one of three FBS players since 2000 to have 400-plus yards rushing and 400-plus yards receiving in his team’s first six games. Curtis Samuel of Ohio State did it in 2016 and Rodney Stewart of Colorado in 2011. ... Maryland has scored at least 27 points in nine straight games, the longest streak in program history. ... With a win, the Terps would reach bowl eligibility at their earliest point since 2001, when they achieved it on Oct. 11. ... Northwestern lost to Wisconsin 42-7 on Oct. 8 and was off last week. Maryland beat Indiana 38-33 last week.