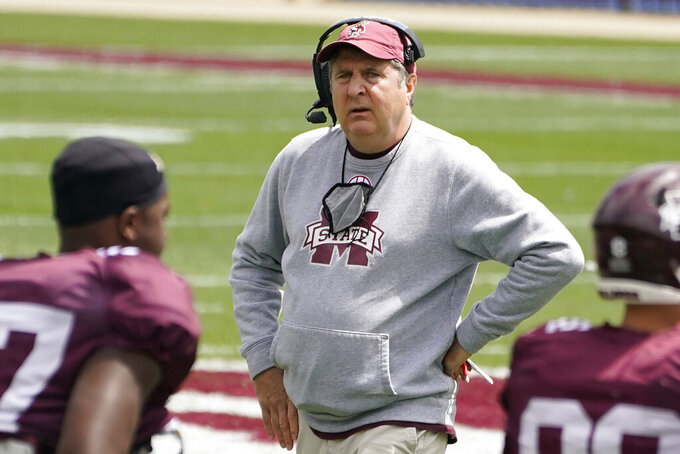 Having guided his first Mississippi State team through an all-SEC regular season gauntlet, coach Mike Leach isn’t fazed by yet another challenging schedule.

He hopes that experience helps his team execute better this season.

Things are somewhat different for MSU in Saturday’s opener against Louisiana Tech, the first of three nonconference matchups before a Southeastern Conference stretch against No. 16 LSU, No. 6 Texas A&M and top-ranked and defending national champion Alabama. Cowbells should be clanging loud at Davis Wade Stadium, where a big crowd is expected after COVID protocols limited attendance last fall.

While that energy gives the Bulldogs an advantage, they say no one is looking past one of five bowl teams they will face in the first seven weeks. (North Carolina State and Memphis follow.)

“The biggest thing is getting everybody on the same page, knowing that anybody can get beat at any time,” MSU linebacker Aaron Brule said.

Leach added of Louisiana Tech, “They’re a good team. They’ve got some size up front. They’re kind of an upperclassmen team and we’re a lower-classmen team, so they have a lot of experience.”

The Bulldogs still reached the postseason and closed on a high note, beating No. 22 Tulsa 28-26 in the Armed Services Bowl.

Mississippi State looks to build on that win. That starts with getting past Louisana Tech, which also looks upward after a 5-5 season and bowl appearance despite COVID-related cancellations.

The “other” Bulldogs return 10 defensive starters seeking improvement after yielding nearly 35 points a game in 2020. Louisiana Tech also added 19 transfers, including 11 to an offense that averaged nearly 27 points and 316 yards.

“With as many new faces as we have on the offensive line, at running back, at quarterback and in the secondary, you just want to make sure you’re simple,” said ninth-year Tech coach Skip Holtz, who’s a win away from his 150th in FBS.

“You just have to make sure we limit what we do and can execute at a high level.”

Some other things to watch as Mississippi State hosts Louisiana Tech:

All signs point to MSU sophomore Will Rogers starting at quarterback in the opener. He averaged nearly 220 yards passing per game with 11 touchdowns last season, and his 69% completion rate was the second highest in FBS history by a freshman.

Graduate Austin Kendall is listed as Louisiana Tech's starting QB after transferring from West Virginia this summer. He spent three seasons at Oklahoma — including playing behind 2017 Heisman Trophy winner Baker Mayfield — before transferring to WVU, where he threw for 2,153 yards and 14 touchdowns in 11 games over two seasons.

Mississippi State tied for 25th nationally last season in turnovers with 18. That was just four more than Louisiana Tech, which tied for 52nd. Tech has been C-USA’s most opportunistic defense since joining in 2013, forcing 197 turnovers.