No. 10 Mississippi visits No. 18 Auburn in SEC West game 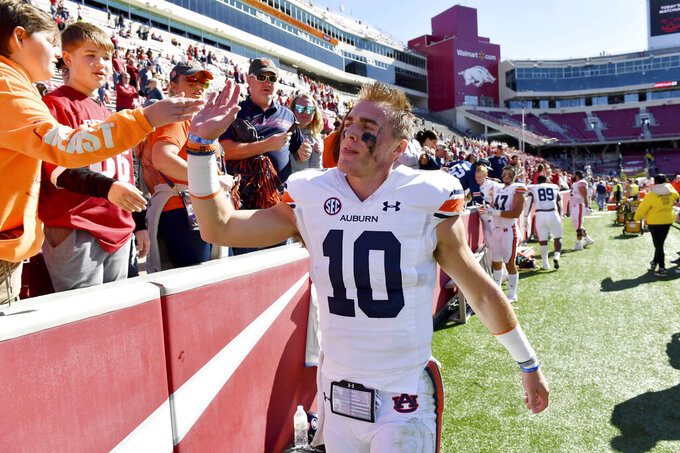 Line: Auburn by 2 1/2, according to FanDuel Sportsbook.

The winner is the SEC West team with the best chance to dethrone defending champion No. 3 Alabama, which also has one league loss but beat the Rebels and faces Auburn to end the regular season. Both have also kept their chances alive for prominent bowl destinations heading into the regular season's final stretch.

The Ole Miss running game against Auburn's defense. The Rebels lead the SEC and rank third in FBS in yards rushing per game, at 263.3 led by QB Matt Corral and RBs Jerrion Ealy, Snoop Conner and Henry Parrish Jr. The Tigers have been solid against the run, ranking fifth in the SEC with an average of 122.9 yards allowed per game.

Mississippi DE Sam Williams leads the SEC and ranks fourth in the nation with 7.5 sacks. Williams forced his third fumble of the season against LSU, when he also had a sack.

Auburn QB Bo Nix is coming off one of his better performances against Arkansas, another ranked SEC West team at the time. He's trying for a strong follow-up to that 21-of-26, 292-yard performance that included a couple of touchdown passes and an interception.

The Rebels have their first top 10 ranking since the final poll of the 2015 season. ... Auburn has won the last four meetings, but the past two have each been settled by a touchdown. ... Auburn is the only SEC team with three players with at least four sacks this season: Eku Leota, Derick Hall and Colby Wooden. ... The Rebels have recorded at least five sacks in back-to-back games for the first time since 1999.