No. 12 BYU surging, set to take on UAB in Independence Bowl 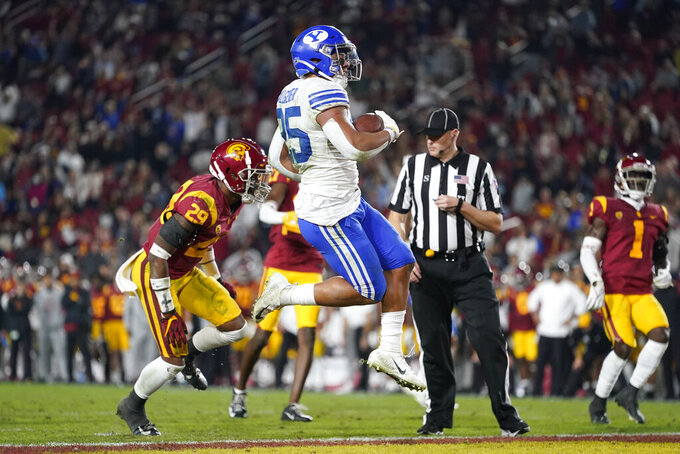 Brigham Young running back Tyler Allgeier (25) runs to the end zone for a touchdown ahead of Southern California safety Xavion Alford (29) during the first half of an NCAA college football game in Los Angeles, Saturday, Nov. 27, 2021. (AP Photo/Ashley Landis)

Line: BYU by 6 1/2, according to FanDuel Sportsbook

BYU is on a five-game winning streak and wants to justify a season-ending AP Top 25 ranking either in the top 10 or close to it, and can do so by reaching 11 wins in back-to-back seasons for the first time in more than a decade. BYU hasn't finished in the top 10 in the AP Poll since 1996. UAB is trying to win a bowl game for just the second time in program history and doing so against a ranked opponent would be a landmark triumph for the program.

BYU's running game, led by Tyler Allgeier and dual-threat QB Jaren Hall, against a UAB defense that ranked first in Conference USA and 15th nationally in fewest yards allowed per game with 323.3.

BYU: Allgeier is in the midst of a second-straight 1,000-yard rushing season. He has 1,414 yards and 20 touchdowns rushing this season. He ended the regular season tied for first nationally in TDs rushing.

The Cougars are 39-12-1 all-time against teams from Conference USA. ... BYU has made 38 previous bowl appearances with a record of 16–21–1. The Cougars have appeared in 19 different bowl games against 34 different opponents. ... This is BYU's 16th bowl game in the past 17 seasons. ... BYU is playing in Louisiana for just the third time, and for the first time in a bowl game. Previously, the Cougars played regular season games in New Orleans against Tulane and LSU. ... Hall passed for 2,583 yards and 20 TDs against five interceptions this seasons. ... UAB is playing in just its fifth bowl game. ... The Blazers have three previous victories over ranked teams. ... UAB has won 42 games since returning to action in 2017, the most wins of any C-USA team during that span. ... UAB QB Dylan Hopkins has thrown for 2,085 yards and 15 touchdowns vs. six interceptions this season. He also has five TDs rushing. He has started nine games this season, going 6-3.