No. 14 USC kicks off new era under Lincoln Riley vs. Rice 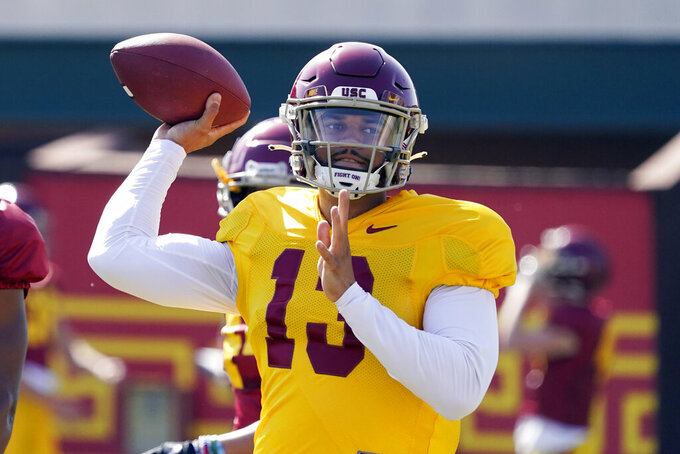 FILE - Southern California quarterback Caleb Williams throws during an NCAA college football practice Tuesday, April 5, 2022, in Los Angeles. Williams isn’t a typical transfer. Rather than adapting to a new coach and an entirely new system, Williams has followed Lincoln Riley from Oklahoma to USC. So he’s playing for the same coach, albeit at a different school. (AP Photo/Marcio Jose Sanchez, File)

LAST YEAR: Rice went 4-8 in Mike Bloomgren’s fourth season, its best record since 2015. USC stumbled to a 4-8 record after firing Clay Helton just two weeks into the season before hiring Lincoln Riley away from Oklahoma in November.

Lincoln Riley takes over at USC after he was hired away from Oklahoma in November. USC stumbled to a 4-8 record last year after firing Clay Helton just two weeks into the season. Riley’s tenure started with plenty of success in the transfer portal, landing big names like quarterback Caleb Williams and wide receiver Jordan Addison, but the Trojans will have to produce on the field to justify the hype. Rice went 4-8 in Mike Bloomgren’s fourth season for its best record since 2015. The Owls will try to duplicate or better their feisty performance to open last season, when they were tied with Arkansas going into the fourth quarter before losing 38-17.

Trojans edge rushers Romello Height and Korey Foreman vs. Owls left tackle Clay Servin. After generating 21 sacks last season, USC will have to get to the quarterback more consistently to have any chance for the Pac-12 title and a spot in the College Football Playoff. Height, who transferred in after two seasons at Auburn, and Foreman, a top defensive recruit in 2021, must turn their athleticism into production. Servin has started 25 straight games and should represent a formidable challenge.

Rice: QB Wiley Green. The fifth-year junior will start his third season opener after winning a training camp battle with Orange County native TJ McMahon. Green was intercepted three times in the fourth quarter by the Razorbacks last season as the Owls’ upset bid was thwarted.

USC: RB Raleek Brown. One of the key members of Riley’s first recruiting class seems likely to make an immediate impact as a runner and receiver during his freshman season. Listed at 5-foot-8 and 185 pounds, Brown has the raw speed to create explosive plays from anywhere on the field.