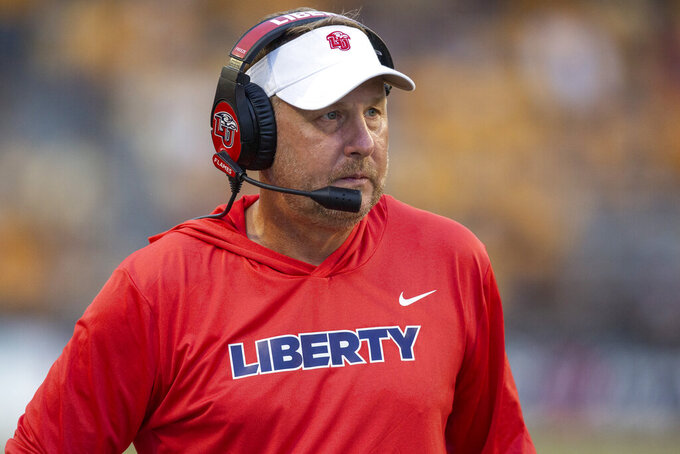 Wake Forest reached the Atlantic Coast Conference championship game last year and is a week away from getting a shot at preseason league favorite Clemson as one of this year's top contenders.

Coach Dave Clawson just needs his players to make sure they're focused on beating Liberty at home on Saturday to keep the 19th-ranked Demon Deacons in the national conversation.

“To me, I'm not all about the eight (regular-season) ACC games,” Clawson said. "The non-conference games are really important. If we want to continue to be relevant nationally, we need to win these games.

“And I always tell the team that the reward for winning a big game is another big game."

The Demon Deacons (2-0) haven't lost a home non-conference game since falling to Notre Dame in September 2018 and have won 10 straight home games overall dating to early in the 2020 season. They had an easy home win against VMI in Week 1, then won at Vanderbilt last week to mark the return of veteran quarterback Sam Hartman to the lineup after missing time due to a blood clot.

That gave Hartman a chance to shake off some rust since he was sidelined early in preseason camp, and he went on to throw for 300 yards and four touchdowns. He needs just 197 yards against the Flames (2-0) to become the Demon Deacons' career passing leader, while also giving him another week of work before the Tigers visit on Sept. 24.

Liberty is hoping for its second win in six tries against a ranked Bowl Subdivision opponent, and its first in the regular season. This is the first of three games against power-conference opponents this season for the football independent.

“You're not going to win all the games when you play Power Five opponents at a Group of Five school, but I think it’s been proven on the last few weekends that it certainly is possible,” Liberty coach Hugh Freeze said. "And I think we’ve proven it’s possible here a few times. So I think that does breed some confidence that you can go in and enjoy the opportunity and kind of see where it leads you in the fourth quarter."

LIBERTY VS. THE ACC

The Flames are 2-10 all-time against ACC opponents, through both wins came recently. Liberty won at Syracuse and Virginia Tech in 2020.

The Demon Deacons have started 2-0 or better six times in seven seasons, including last year's 8-0 start that carried them to a No. 10 ranking. The Flames are trying to hit 3-0 for the third straight season, which has never happened in program history.

Liberty quarterback Kaidon Salter won his first career start last week against UAB. The second-year passer who transferred from Tennessee threw for 202 yards and ran for 79 yards with a short touchdown.

Hartman's return strengthens the potential for one of the nation's top offenses last season. It also led to a huge game for receiver A.T. Perry.

The fifth-year receiver had a quiet opener against VMI with Mitch Griffis at quarterback, finishing with three catches for 47 yards. But he had five catches for 142 yards with a 68-yard score against Vanderbilt.

Wake Forest has won both meetings in the series.