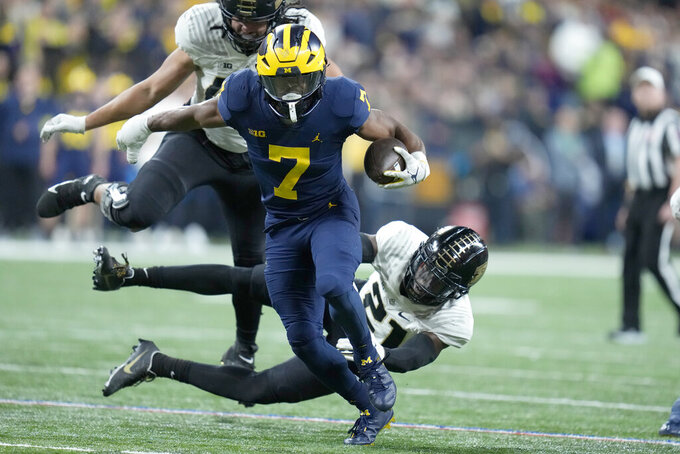 Now they're hoping it propels them toward another championship.

Edwards ran for 185 yards and a touchdown, J.J. McCarthy threw for three scores and Michigan beat Purdue 43-22 on Saturday night in the Big Ten championship game for its second straight conference title and a likely No. 2 playoff seed.

College football's winningest program has the first 13-win season in school history. Two more victories would give the Wolverines (13-0, No. 2 CFP) their first national championship since 1997 — even without Heisman Trophy candidate Blake Corum because of a season-ending left knee injury.

“He’s the best running back in college football and he deserves the Heisman. If he hadn’t gotten hurt, he would have easily won the Heisman so this is for Blake Corum,” Edwards said after being named the game MVP. “I think it's kind of self-explanatory what our goals are. I believe we’ve talked about them all year I don’t think much more needs to be said.”

Those goals appeared to be in jeopardy just last week when Corum managed to play just one series against rival Ohio State.

But Edwards stole the show, shredding the Buckeyes for 216 yards and two scores and was every bit as good in his encore — just hours after Corum posted on Twitter he had undergone knee surgery.

Edwards broke open this game with a 60-yard on the first play of the second half to set up one score. He added a 27-yard TD sprint on Michigan's next series to make it 28-13 and Purdue (8-5) never recovered from the seven-play onslaught after trailing 14-13 at halftime.

“They didn't panic when the game was close in the third quarter,” Boilermakers coach Jeff Brohm said. “They came out, ran the ball and imposed their will.”

While Edwards was the ringleader, he had plenty of help.

McCarthy was 11 of 17 with 161 yards. Kalel Mullings scored twice on short runs and Ronnie Bell caught five passes for 67 yards and one TD.

But even they knew the difference Saturday was Edwards.

“You put anyone back there, they’re going to get yards,” McCarthy said. “But Donovan is a special back, a special guy and I’m glad he’s on our side.”

Purdue quarterback Aidan O'Connell and receiver Charlie Jones helped the Boilermakers make it interesting for a while.

O'Connell was 32 of 47 with 366 yards and two interceptions after missing some practice time early this week to mourn the death of his oldest brother. Jones, who lost to Michigan in last year's game while playing for Iowa, had 13 receptions for 162 yards.

“We were going to have to play a near-perfect game to win,” O'Connell said. “We turned the ball over and didn't score (enough) touchdowns.”

Michigan showed no signs of a hangover after last week's rout over the Buckeyes, taking a 7-0 lead on its opening possession with a 25-yard TD pass from J.J. McCarthy to Colston Loveland.

Michigan retook the lead on McCarthy's 7-yard TD pass to Luke Schoonmaker and Edwards helped them put it away while holding the Boilermakers to just three second-half field goals.

Purdue: The Boilermakers' magical season ended with a solid showing in the championship game where they played better than most expected. Still, they won the Big Ten's wild, wild West, both trophy games and should be bound for a warm-weather bowl game.

Michigan: Yes, the Wolverines may have already locked up a top-two seed thanks to losses by Southern Cal and TCU. Michigan now has back-to-back conference crowns for the first time since 2003-04 though the hard part remains — ending its national title drought.

Brohm played one season in the now defunct XFL and has acknowledged that experience helped him understand how to inject personality and creativity into play-calling. It was on full display Saturday.

A surprise end around set up Purdue's first score, a fake punt helped keep its second scoring drive alive and then Mockobee sprinted 25 yards on a fake flea-flicker in the third quarter.

O'Connell said this week and last were difficult for himself and his family and though he played almost flawlessly in the Boilermakers victory over rival Indiana last week, he acknowledged football was hardly his primary thought.

“It’s been very difficult, as you would imagine. You know, when you first hear of news like that, it’s shock and denial and just a lot of emotions,” O’Connell said. “I felt a lot better this week than last week, but it’s been a little crazy. It’s going to be good to get some time to relax and spend some more time with my family, hopefully.”

The sixth-year quarterback, a former walk-on turned two-time all-conference selection, said he's hoping to get some rest and spend time with his family before the bowl game.

Purdue: Will find out its bowl game, destination and opponent Sunday.

Michigan: Waiting to see where its headed and who it will face in the national semifinals.