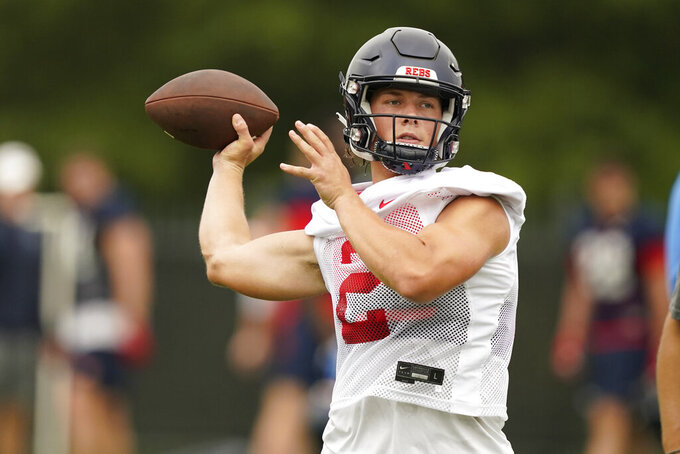 Line: Ole Miss by 21 1/2, according to FanDuel Sportsbook.

Coach Lane Kiffin and the Rebels are trying to sustain success after their first 10-win regular season. They'll be relying on a big group of transfers and a new quarterback — either USC transfer Jaxson Dart or Luke Altmyer. New Troy coach Jon Sumrall, meanwhile, is trying to get his tenure off to a strong start. He had recently been promoted to co-defensive coordinator at Kentucky before landing the Troy job.

Troy's offense versus the Rebels' defense. With all the new pieces, it's possible that Ole Miss will take a while to get going offensively. But a defense that was much improved last season faces a Trojans offense that averaged just 22.8 points and 338.4 yards a game in 2021. The Rebels' also turned to the portal for some instant defensive starters.

Troy: LB Carlton Martial. Leads active players with a career average of 9.40 tackles per game. His 442 career tackles ranks 18 shy of the Sun Belt record of 460.

Ole Miss: RB Zach Evans could actually be an upgrade for a team that lost its top three tailbacks. The TCU transfer averaged 7.3 yards per carry in two seasons at TCU, including nearly 5 after contact. Evans was a top 20 overall prospect according to recruiting services coming out of high school.

Ole Miss's 51-21 win over Troy in 2013 in the teams' only other meeting was later vacated under NCAA sanctions. ... The Rebels have won nine straight home games dating to Nov. 14, 2020. ... The Trojans have won three straight openers but have dropped four of their last five against FBS opponents. ... Troy has four returning starters on the offensive line with a combined 105 starts. ... Sumrall is the third straight Troy head coach who is a former assistant at the school. He was also on the Rebels' 2018 coaching staff. ... The Trojans are 3-23 against current Southeastern Conference members.