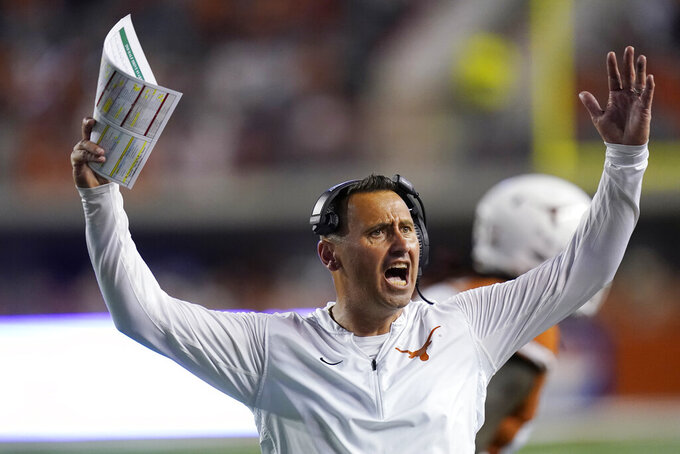 LUBBOCK, Texas (AP) — Texas coach Steve Sarkisian isn't offering any clarity on the injury-clouded situation at quarterback for the 22nd-ranked Longhorns for his first, and possibly only, trip to Texas Tech.

The top two options for the Big 12 opener Saturday are quite familiar to Texas Tech's Joey McGuire, the former Baylor assistant and lifelong Texan who's now facing the Longhorns for the first time as a head coach.

McGuire tried to get Quinn Ewers to come to Lubbock when the former Dallas-area high school standout was transferring from Ohio State. Hudson Card was another top recruit, playing just a few miles from the Texas campus.

Ewers, who won the starting job, was out last week against UTSA with a sprained clavicle, while Card been playing through the high ankle sprain he sustained after replacing Ewers two weeks ago against then-No. 1 Alabama.

“I guess Quinn had more stars or a higher rating, but you're talking about four- and five-star guys,” said McGuire, who won three state championships as a Texas high school coach. “They're going to run the same offense.”

Sarkisian offered more this week than he did before last week's 41-20 victory over UTSA, saying Monday that all of the quarterbacks went through the week's first practice. McGuire assumed that meant at least one of them didn't last week.

In his final meeting with reporters Thursday, Sarkisian said Ewers would suit up and Maalik Murphy and Charles Wright also would make the trip — and that his choice for a starter wouldn't be a game-time decision.

Card beat out Casey Thompson for the job last season but was replaced in his first road game — a rough trip that ended with Thompson taking the snaps in a 40-21 loss to Arkansas.

“I think Hudson has really matured mentally,” Sarkisian said. “He’s more than capable of operating our offense at a high level. He’ll be ready to go when his number is called. I’m proud of him, This journey here has not been an easy one for him.”

Sarkisian's future trips to Lubbock have nothing to do with how hot his coaching seat gets in his second year: The Longhorns might not return to the home of one of their longtime rivals in 2024 if the switch to the Southeastern Conference is bumped up a year from 2025.

It all hinges on the Big 12's pursuit of a new media rights deal. Even with an agreement and an earlier departure for Texas and Oklahoma, there is still talk of Texas and Texas Tech continuing a series set for a 63rd consecutive meeting.

“Passionate fans, college town, that's what it's about,” Sarkisian said. “You've got to like these environments. That's the beauty of why we get to do what we do.”

Big 12 games always bring out a smattering of “Horns Down” hand signs from Texas opponents and it will be sure to make an appearance with just about everyone in Jones Stadium.

But it can also be a 15-yard penalty if an official thinks Texas Tech players are doing it in an unsportsmanlike or taunting manner. McGuire said he’ll remind his players of the rule.

“It makes me laugh, I don’t get it. It truly makes me laugh that it’s a rule,” McGuire said. “I’ll make sure it doesn’t happen. I don’t want to hurt anybody’s feelings.”

The Longhorns still can lean on a strong run game no matter what's happening at quarterback. Bijan Robinson ran for 183 yards and three touchdowns and Roschon Johnson had 81 more with a score in last week's 41-20 victory over UTSA.

The Longhorns rolled up 298 yards behind a young but improving offensive line that starts two freshmen. Robinson is averaging a robust 6.1 yards per carry and was clocked at 19 miles an hour at the end of his 78-yard touchdown run against the Roadrunners.