No. 25 Coastal Carolina rolling, Georgia Southern up next 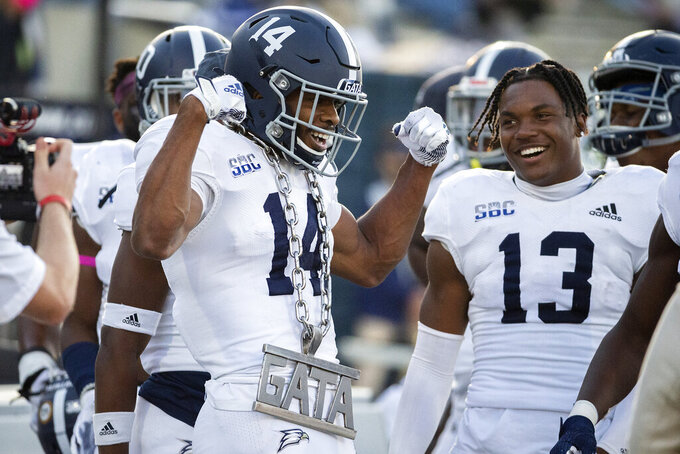 Georgia Southern cornerback Darrell Baker Jr. (14) celebrates on the sideline after intercepting a pass during the second half of an NCAA football game against Massachusetts, Saturday, Oct. 17, 2020, in Statesboro, Ga. (AP Photo/Stephen B. Morton)

No. 25 Coastal Carolina plays for the first time ever as a ranked FBS team when it faces Georgia Southern on Saturday.

Chanticleers coach Jamey Chadwell isn't sure how long the ranking — or the game against Georgia Southern — will last.

Chadwell acknowledged that despite how many milestones his team has achieved this year, unless they keep winning, they'll sink like a stone from the polls.

“We're realistic knowing if we slip up one time, we'll probably never see it again,” Chadwell said. “I told our guys if you want to stay there and continue doing something for this program, you got to continue to keep winning.”

That could be difficult for the Chants (4-0, 2-0 Sun Belt Conference) because the Eagles (3-1, 1-1) play with a similar style — like Coastal, relying on a strong run game and physical defense.

Both teams are in the top 20 nationally, averaging over 200 yards rushing a game this season. That emphasis means a fast-paced game with fewer possessions, Caldwell said, and perhaps fewer opportunities to rally from falling behind.

“I think time of possession will be very key in this game,” Georgia Southern coach Chad Lunsford said. “They're very balanced on offense, but they try and establish drives. If they can do that, keep our offense off the field, that doesn't bode well for us.”

Some other things to look for when Georgia Southern is at No. 25 Coastal Carolina:

Coastal Carolina is averaging more than 40 points a game this season behind quarterback Grayson McCall, a freshman from Indian Trail, North Carolina. McCall has thrown for 11 touchdown passes with just one interception this season. He accounted for five scores in the win at Kansas to start the year.

Georgia Southern had appeared like it might go three weeks between games after its Oct. 14 contest with Appalachian State was postponed until December. But Eagles administrators were able to bring in UMass, which was eager for games after it had originally called off fall football. Georgia Southern defeated the Minutemen 41-0 last week.

Georgia Southern quarterback Shai Werts is moving up career lists at the school and in the conference. Werts, a senior, is starting his 40th game and is among just seven Eagles QBs with 2,000 yards passing and rushing in their careers. He is 184 yards away from becoming the top rushing quarterback in Sun Belt history.

The Chanticleers were called for an oddball penalty for two players with the same number playing against Louisiana-Lafayette in the fourth quarter of a tie game. Coastal Carolina coach Jamey Chadwell took responsibility saying in the heat of the moment, the uniform slip up got by him. But not again, ending the practice of same uniform numbers. “We changed that, so no more,” he said.

Coastal Carolina's football stadium was allowed by the state of South Carolina to have no more than 5,000 people in the arena, including both teams, their support staffs, bands and other spirit groups along with fans. That's less than a quarter of the stadium's 20,000 capacity. This is the third of six home games planned for the Chants this season.