No. 25 UCF remains in contention to appear in AAC title game 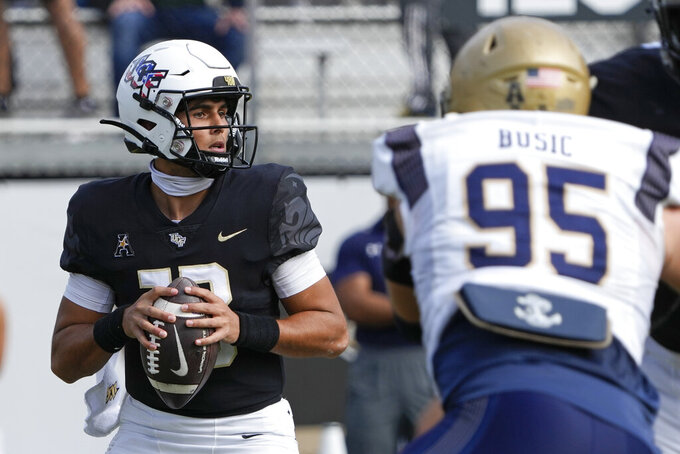 Central Florida quarterback Mikey Keene, left looks for a receiver as he is rushed by Navy defensive end Jacob Busic (95) during the second half of an NCAA college football game, Saturday, Nov. 19, 2022, in Orlando, Fla. (AP Photo/John Raoux)

No. 25 UCF (No. 22 CFP) needs a win in regular-season-ending matchup between intrastate rivals to remain in contention for a spot in next week’s American Athletic Conference championship game. Last Saturday's three-point loss to Navy cost the Knights a chance to host the title game. UCF holds a head-to-head tiebreaker advantage over Tulane and Cincinnati in the event of a two-way tie for second place in the league standings. USF, finishing a disappointing year in which the Bulls’ only victory has come against FCS opponent Howard, fired coach Jeff Scott earlier this month.

UCF’s powerful ground attack against USF’s porous defense. The Knights lead the AAC in rushing at 249.5 yards per game, rank seventh nationally, and have gained over 200 on the ground in eight of 11 games. Offense hasn’t been as big an issue for USF as defense. The Bulls average 27 points per game but are allowing opponents to score nearly 41.

UCF: Dual-threat QB John Rhys Plumlee has thrown for 2,122 yards and 12 touchdowns. The Ole Miss transfer is also the Knights’ leading rusher, averaging 5.6 yards per carry while running for 715 yards and nine TDs.

USF: RB Brian Battie has rushed for 1,042 yards and seven TDs, averaging 6.6 yards per carry for the Bulls. He enters with a streak of four consecutive 100-yard games.

This is the 14th meeting between the schools situated less than 100 miles apart off Interstate 4. With UCF leaving the AAC for the Big 12 next year, the Knights and Bulls figure to not face each on a regular basis moving forward. ... UCF has won five in a row in the series. ... USF QB Byrum Brown made his first career start and completed his first 21 passes, with three TDs, during a loss to Tulsa last week. The 21 completions to start the game were the most by an FBS player since Middle Tennessee State’s Brent Stockstill completed 22 in a row against Alabama A&M in 2016. Brown finished 21 of 25 for 240 yards. ... Knights RB Isaiah Bowser leads the AAC with 13 TDs rushing. ... The Bulls fired Scott on Nov. 6, the day after a lopsided loss to Temple. They’ve gone 0-2 under acting coach Dan Da Prato.