No. 3 Buckeyes, No. 15 Northwestern vie for Big Ten crown 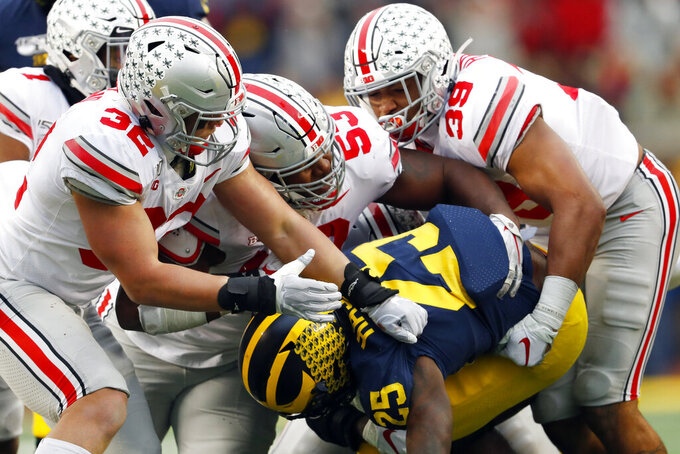 Ohio State is seeking a school record fourth consecutive outright Big Ten title but also hopes to burnish its resume for the College Football Playoff. The Buckeyes have held the fourth and final CFP spot for weeks, but a standout showing Saturday might eliminate any argument that another team deserves a CFP berth. For the second time in three years, Northwestern heads to Indianapolis in search of its a conference crown. The Wildcats haven't won a title since 2000 and haven't won an outright title since 1995. A win would be the third outright Big Ten championship in school history.

Ohio State QB Justin Fields vs. Northwestern secondary. Fields is completing nearly 80% of his throws with 15 touchdown passes and three interceptions. He had his poorest performance this season against Indiana, which ranks eighth in the conference against the pass. Northwestern's defense is ranked in the top five against the pass, run, overall and scoring defense. The defense also is experienced and is the only Power Five team with three players with more than 200 career tackles.

Northwestern LB Paddy Fisher. He leads all active FBS players with 383 career tackles and 11 forced fumbles. Fisher and the Wildcats other linebackers — Blake Gallagher and Chris Bergin — are all in the Big Ten's top 11 in tackles per game. Fisher has been the glue of this defense for years and it's a good bet he hasn't forgotten how Ohio State pulled away for a 45-24 victory to claim the 2018 title.

Ohio State WRs Chris Olave and Garrett Wilson. While Fields generates Heisman Trophy talk, Olave and Wilson make it all possible. Both are fast and athletic, capable of making acrobatic catches. Olave has 36 receptions for 528 yards while Wilson has 34 catches for 572 yards. Each has five TD receptions.

Northwestern allows a league-low 14.6 points per game including 4.1 in the second half. ... Ohio State has played just one game since Nov. 21. ... The Wildcats have come from behind in five wins this season and have won three games by eight or fewer points. ... The Buckeyes have won four games by double digits and three by more than 20 points. They have won eight straight in this series. ... Wildcats defensive coordinator Mike Hankwitz is in his 51st season as a coach and has been part of 399 wins during his career. ... Fields (71) and Northwestern QB Peyton Ramsey (67), a grad transfer from Indiana, have accounted for the two highest touchdown totals among active Big Ten players. ... Northwestern DE Eku Leota has four sacks in the last six games despite coming off the bench.