No. 5 Clemson, No. 10 NC State set for Death Valley matchup 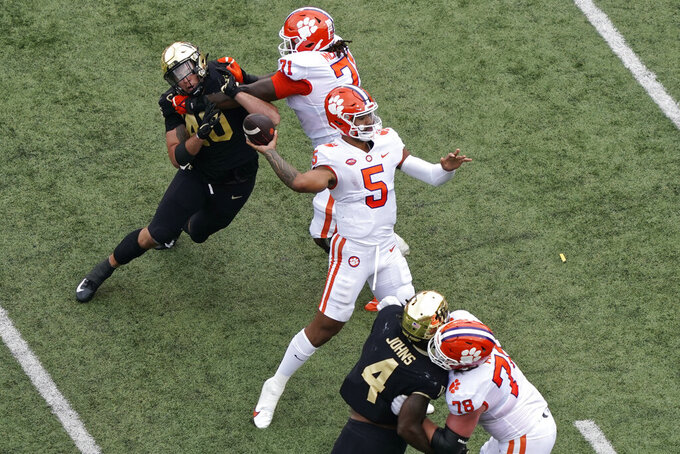 Line: Clemson by 7, according to FanDuel Sportsbook.

Clear control of the ACC Atlantic Division with near the halfway point of the season. Clemson comes off a dramatic, 51-45 OT win over previously undefeated Wake Forest and can hold a tiebreaker against both its prime competitors in the division. North Carolina State ended a long losing streak against the Tigers last year and will look to win its first game at Clemson since Philip Rivers was their quarterback in 2002.

Clemson QB DJ Uiagalelei vs. North Carolina State's defense. Uiagalelei is a revamped passer this season, already throwing for more TDs in four games this year than he did a season ago. But the Wolfpack are one of the ACC's top defenses, first in fewest points allowed per game, second in the league against the rush and third against the pass.

North Carolina State: QB Devin Leary is the ‘Packs’ clear leader, completing nearly two-thirds of his throws for 890 yards and nine touchdowns against just two interceptions. Leary is 16-3 as the Wolfpack's starting quarterback the past two seasons.

Clemson: DT Tyler Davis' return from injury against Wake Forest was a big reason the Tigers were able to largely shut down the run and get a bit of pressure on Deacons quarterback Sam Hartman in the fourth quarter and overtime. Davis is quick and powerful and can shut down the middle.

Clemson has a 36-game home win streak, dating back to November 2016 and can tie Florida State's ACC mark of 37 straight by beating the Wolfpack. The Tigers also carry a 10-game win streak overall, the longest in the Power Five. ... North Carolina State is in its first top 10 battle in football history. ... Clemson has played five previous undefeated matchups at Death Valley where both teams are 4-0 or better. The Tigers are 4-1, the loss coming to Jameis Winston and Florida State in 2013. ... North Carolina State center Grant Gibson has special ties to Clemson. His grandfather is former Charlotte Mayor Harvey Gantt, the first Black student to enroll at Clemson in 1963. ... Clemson has scored 175 points, tied for second most through four games in program history. Only the 2000 team that started 8-0 has scored more during that stretch.