No. 7 Cyclones open season of high expectations against UNI 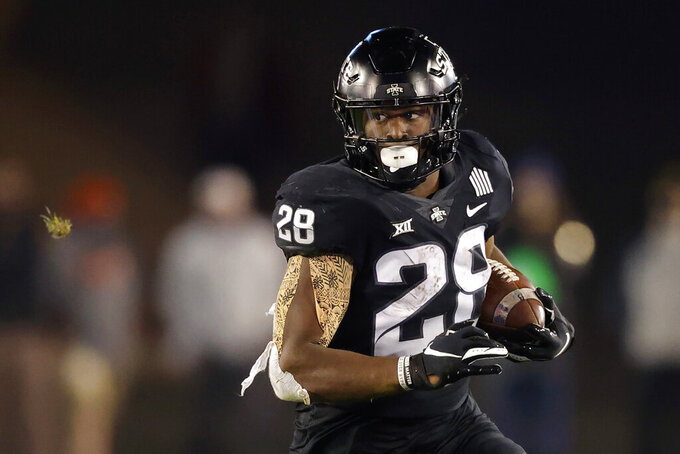 Expectations for Iowa State have never been higher after the Cyclones reached the Big 12 championship game and won the Fiesta Bowl. Almost every starter is back. But remember, this is the same program that opened 2020 with a loss to Louisiana-Lafayette, was pushed to three overtimes by UNI in 2019 and lost 25-20 to the Panthers in coach Matt Campbell's 2016 ISU debut. Campbell will have this group of Cyclones ready. The FCS Panthers love playing the state's big boys and have beaten Iowa State three times since 2007.

Iowa State RB Breece Hall vs. UNI's rushing defense. Hall ran for at least 100 yards a nation-leading nine times last season and is the front-runner for the Doak Walker Award. Led by All-America DT Jared Brinkman, the Panthers allowed 108 yards per game during their spring season and a total of two rushing touchdowns in seven games.

UNI: QB Will McElvain won't be intimidated at Jack Trice Stadium. The third-year starter threw for 228 yards and a touchdown with no interceptions in the 2019 opener, that 29-26 triple-overtime loss. McElvain is looking to bounce back from a disappointing spring when he missed two games because of COVID-19 and the Panthers' offense struggled.

Iowa State: LB Mike Rose is the returning Big 12 defensive player of the year. His five interceptions were most by an FBS linebacker and most by an ISU player since 2009. The preseason AP All-American could leave as the most decorated defensive player in program history.

UNI returns all 22 starters and Iowa State brings back all but three. ... Campbell is 2-3 in openers at ISU. ... Hall's 23 touchdowns and 138 points were the most in program history. ... The Panthers were 3-4 in the spring and their scoring average of 19.6 points per game ranked 68th out of the 97 FCS teams that played.