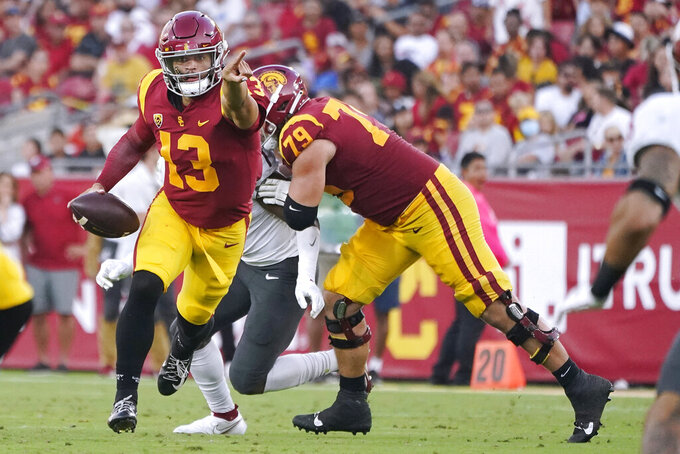 Southern California quarterback Caleb Williams (13) signals as he runs out of the pocket during the first half of the tem's NCAA college football game against Washington State on Saturday, Oct. 8, 2022, in Los Angeles. (AP Photo/Marcio Jose Sanchez)

Line: Utah by 3, according to FanDuel Sportsbook.

The Trojans are off to a 6-0 start for the first time since 2006. That version of USC, led by coach Pete Carroll, lost game No. 7 at Oregon State, 33-31. It won’t be easy for Caleb Williams and Co. at Rice-Eccles Stadium, where the Utes are 81-25 under coach Kyle Whittingham. Utah increased the capacity of the stadium to 51,444 with an expansion in 2021. The Utes were picked to win the Pac-12 by the media in a preseason poll. They had their seven-game Pac-12 conference winning streak halted by UCLA last weekend.

Utah needs to find a way to contain Southern California defensive lineman Tuli Tuipulotu, who is coming off a monster performance against Washington State. He recorded four tackles for loss and three sacks, including two within three plays in the first quarter. The Utes are allowing less than a sack a game behind an offensive line led by Braeden Daniels, Keaton Bills, Paul Maile, Michael Mokofisi and Sataoa Laumea.

Southern California: WR Jordan Addison, who leads the team with 32 catches and 479 yards. He also had six touchdown catches. The transfer from Pittsburgh is tied for the team lead in TDs with running back Travis Dye.

Utah: RB Tavion Thomas. He was nominated for offensive player of the week honors after rushing for 91 yards and a score at UCLA. Thomas has rushed for more than 2,000 yards in his career with Cincinnati and Utah.

This marks the first time the Trojans will play a ranked opponent this season. ... Trojans linebacker Carson Tabaracci transferred this fall from Utah after he spent the spring with the Utes. ... Utah is 4-3 against USC in Salt Lake City. ... The Utes lead the conference in yards passing allowed (179.3), time of possession (33:01) and total defense (315.8). ... Under Whittingham, Utah has a 66-23 mark when ranked in the AP Top 25. ... The Utah defense has 10 interceptions, including five by Clark Phillips III. ... The sister of USC linebacker Tayler Katoa, Eliza, was an outside hitter for the Utes’ volleyball team.