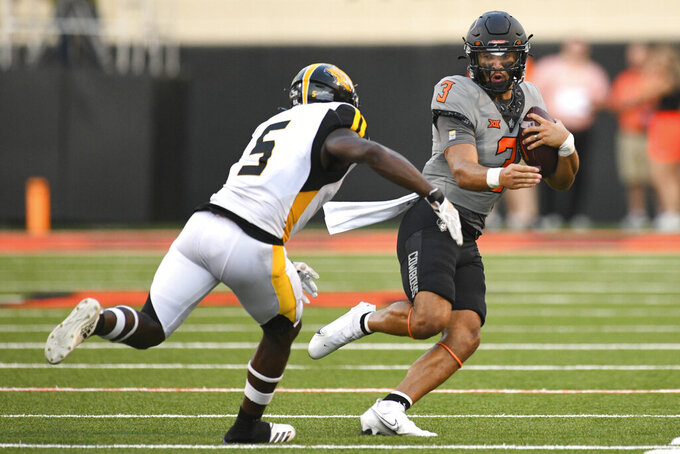 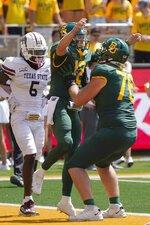 Line: Baylor by 1½, according to FanDuel Sportsbook.

A rematch of the Big 12 championship game last December, when Baylor safety Jairon McVea knocked running back Dezmon Jackson out of bounds just short of the end zone on a desperate, fourth-down dive in the final seconds. That gave the Bears a 21-16 victory and denied the Cowboys their first Big 12 title since 2011. Both of those players were seniors. Oklahoma State won the regular-season meeting last October. The Cowboys are coming off an open date, while Baylor began league play with a 31-24 win at Iowa State.

Baylor offensive line vs. Oklahoma State defensive line. Both groups are among the most experienced in the nation. The Bears returned five returning starters, including All-Big 12 left tackle Connor Galvin. The front four on the Cowboys defense has 113 FBS starts combined and all are in graduate school. Their average age is 24 years and two months.

Oklahoma State: In four games since that title-game loss to Baylor, Cowboys dual-threat senior quarterback Spencer Sanders has thrown for 1,287 yards, run for 235 and accounted for 17 TDs (14 passing, three rushing).

Baylor: QB Blake Shapen was filling in for injured starter Gerry Bohanon when he completed his first 17 passes and threw three touchdowns in the Big 12 title game. Shapen won the job in the spring and Bohanon transferred to USF. Shapen is 69-of-100 passing for 773 yards and seven TDs with one interception this season.

Oklahoma State is the Big 12′s top scoring team at 51.7 points per game, with more than 30 points in nine of its last 14 games. Baylor has held 18 consecutive opponents to 30 points or less — only one of them reached 30. ... Baylor has won nine consecutive home games since a 42-3 loss to Oklahoma State in the 2020 regular-season finale. ... Bears freshman RB Richard Reese has six rushing TDs, five of those coming in the first two home games. ... There have been 13 different players who have scored TDs for the Cowboys.