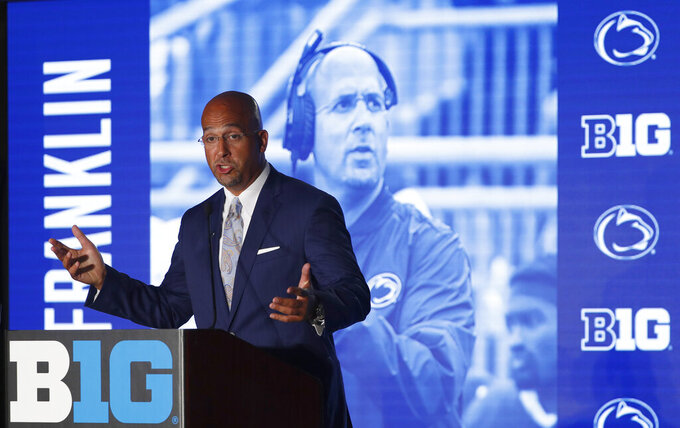 CHICAGO (AP) — The two most important spots on a football team are the coach and the quarterback. Ohio State has questions at both.

The Buckeyes aren't the only powerhouse program with uncertainty in the Big Ten's East Division. Michigan and Michigan State each have a new offensive coordinator, and Penn State has to find a replacement for quarterback Trace McSorley, a sixth-round pick of the Baltimore Ravens.

For the Buckeyes, Ryan Day has taken over for Urban Meyer, who resigned after seven seasons and a national championship. Day was the offensive coordinator and has already gotten a taste of being in charge on the sidelines: Last season began with a three-game suspension for Meyer following an investigation into his handling of allegations of domestic abuse against former assistant Zach Smith.

"I think the easy thing to do is to ask how are you different than Urban Meyer, and that's not something I really like to answer because first off, you don't replace a legend," Day said Thursday at Big Ten football media days. "You don't replace one of the best football coaches in the history of the game. What you can do is just be yourself, and I think that's what I'm doing."

"(Meyer) was more of an old-school coach," he said. "Coach Day is going to ask for the same thing but it's more in a laid-back way. We respect both coaches and there's no difference. Instead of yelling and screaming at you, (Day's) just going to demand it in an asking way. I've had it the opposite way my entire life, so this doesn't faze me."

Hill is just 48 catches from breaking David Boston's school record. The question remains: Who will throw him the ball?

Day is hesitant to name a starter, but Georgia transfer Justin Fields is the presumed starter over Kentucky transfer Gunnar Hoak.

"He has a strong arm," Hill said of Fields. "He had to get used to the receivers, the routes, a different offense, but I feel like Justin can bring a lot to the offense because he can use his legs a little more than Dwayne did last year. A lot more RPOs (run-pass-option) in the running game, so I feel like he brings a lot to the offense."

Gattis, 34, is considered one of the elite, young offensive minds in the sport, but he is embarking on the biggest job of his young career.

"(I've) been watching coach Gattis since he was at Western Michigan and followed his career," Michigan coach Jim Harbaugh said. "I felt he was just very decisive. ... We've been learning from him. He's got a great system."

Michigan State also has a new offensive play-caller with Brad Salem the new offensive coordinator. Dave Warner and Jim Bollman, who previously shared the role, were reassigned to position coaches.

Salem, who is entering his 10th season as an assistant, also is back to coaching running backs, which he did from 2010-12 before taking over as quarterbacks coach in 2013.

The Spartans were 13th in the conference in scoring last season, averaging only 18.7 points a game. They finished 7-6 and lost to Oregon in the Redbox Bowl, 7-6.

"(I've) been very, very impressed with the way we've gone about our business since the bowl game," head coach Mark Dantonio said. "We're excited about '19."

Michigan State this year hosts Penn State, a program that is also looking to fill a rather large hole on the offensive side of the ball after the departure of McSorley.

"Obviously, whenever you lose a quarterback that played as many games and started as many games as Trace McSorley did for us and was able to win at such a high level, obviously there's question marks going into the season," Franklin said. "But we've been fortunate to be able to recruit extremely well. Very confident in the way we developed that position, as well, and we think we're going to have great competition."